I was running with my buddy Priit, when I accidentally dropped my trusty Nexus 5 phone and cracked its screen. The screen had fractures, but was still perfectly legible; and the hardware still functioned. So, instead of throwing it away, I gave it a new life on my wall, as a personal “HUD” screen, showing relevant info such as weather, time and bus schedules.

The first revision was just a hacked-together .html page with some inline Javascript string concatenation. It fetched relevant data from publicly available API-s and displayed it out. The page took as little work as possible, to get the prototype usefulness validated.

As I was already running a in-home Openshift3 cluster, deploying it into a Nginx stateless web container was a non-issue and after two nights of hacking I had a functional prototype. 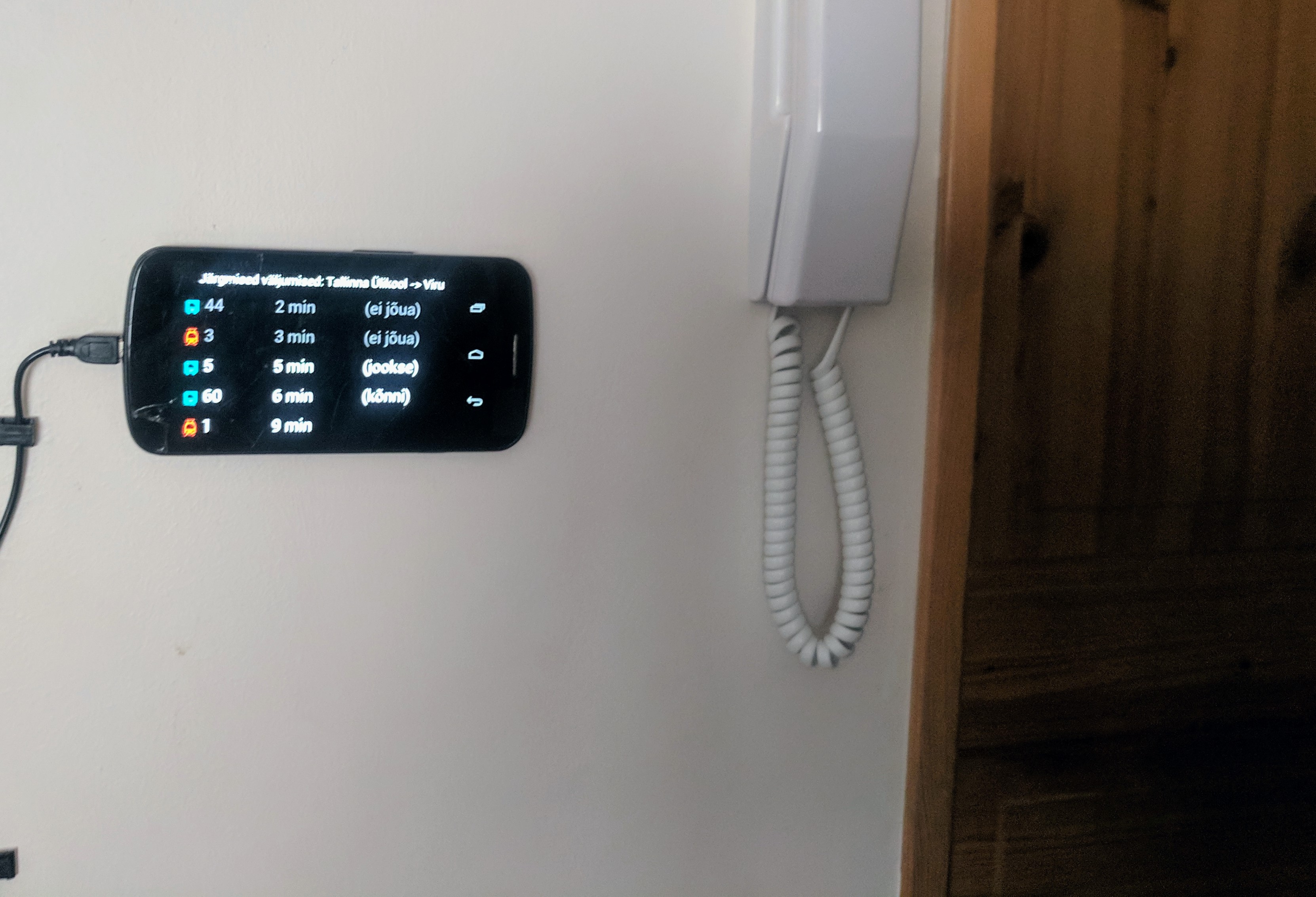 The solution was quick to implement and worked; providing useful information when I was heading out. However, as quick PoC-s often do, it had its problems: 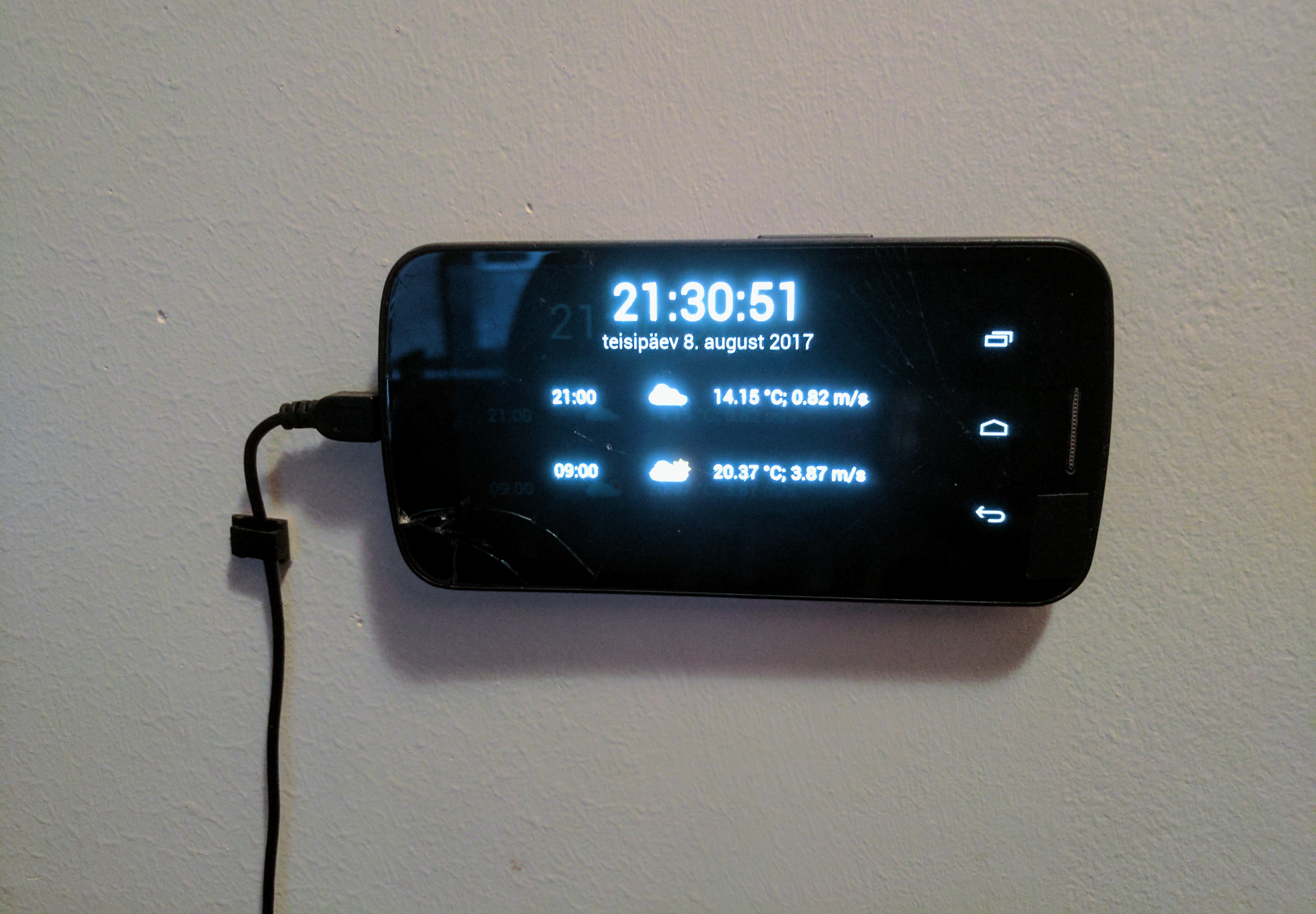 Screen burn-in: the outlines of previous content are visibly “burned in”.

I was satisfied that the concept worked and provided value; time to refactor.

I ordered a cheap-ish, but still good quality (excellent, large screen!) tablet from China -Teclast T10. This gave me larger screen real-estate and also a better quality (and not broken) touch-screen.

I rewrote the code from zero and split the project into two parts: screen-frontend (Vue.js) and screen-backend (Python / Flask). This allowed me to do it in a API-first manner and also keep everything nice and apart.

Getting to know Vue and Webpack without prior major JavaScript experience was a challenge, especially the asset build process (I insist in using CoffeeScript and Sass over their ‘plainer’ cousins), but finally, I succeeded.

I removed most of the hardcoded values (weather station to use, bus stop ID-s) from the code, which makes it more portable and - in theory - allows others to benefit from the project, although this is not a goal in itself.

I switched to weather data provider to the national weather service, because they have local data (although in XML…) and audio reports.

Why would http://www.ilmateenistus.ee/ilma_andmed/xml/hoiatus.php API respond with HTTP 404 for valid queries is beyond me. Whoever developed that endpoint owes me 30 minutes of lost time.

I solved the screen burn-in problem by keeping the screen OFF most of the time. The tablet turns the screen ON automatically for five minutes when the front-facing camera detects motion. This saves the screen, some power and also keeps the ambient light low at night. This can be done with the Fully kiosk browser. 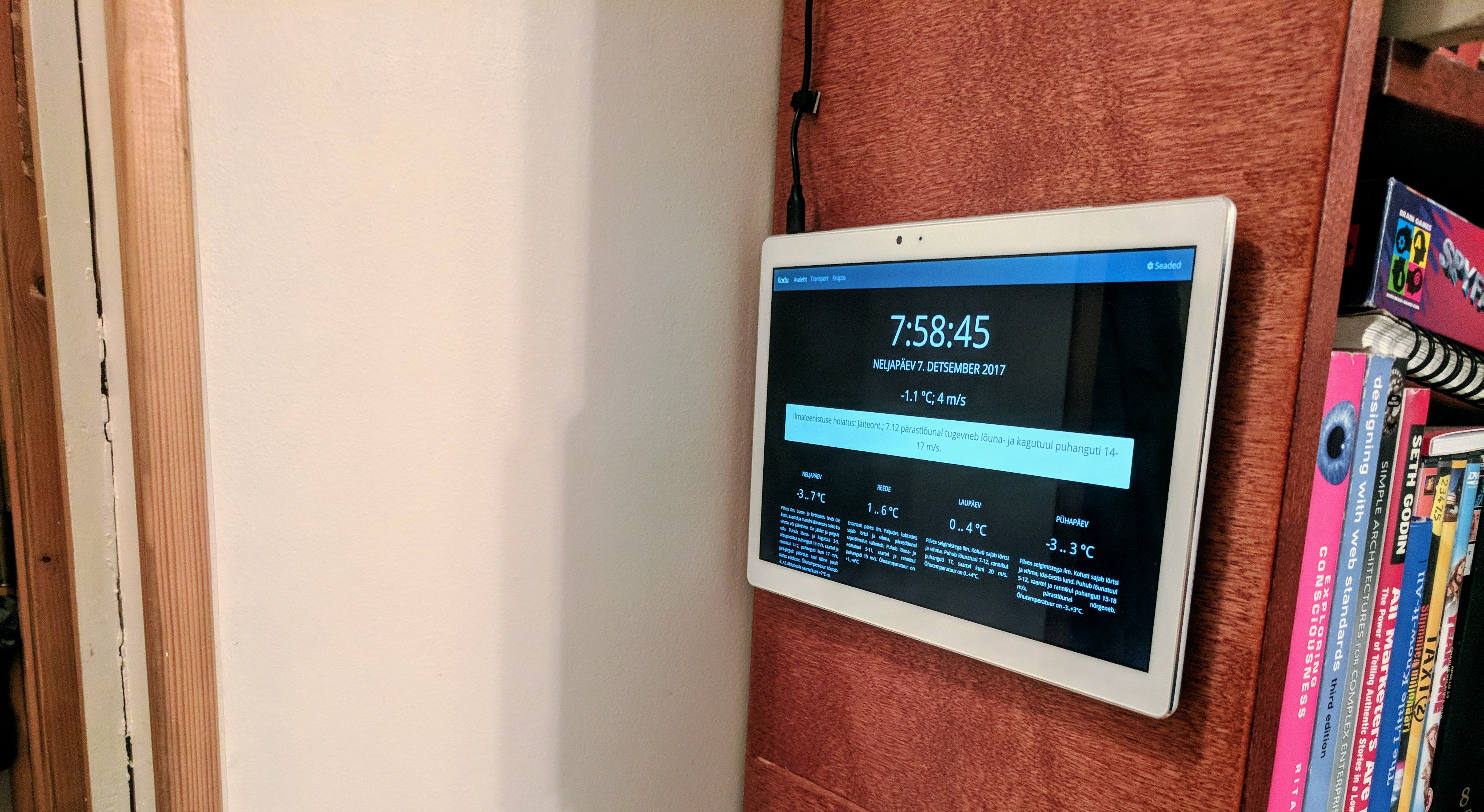 Tentative future plans include refactoring the codebase some more (don’t look at my variable names…) and adding more features, for example a tab that shows readings from home IoT sensors.

As the tablet is running its original Chinese firmware, I don’t consider it a “trusted” device: it could be doing much more than only detect motion with its camera. Hence, I will either try to flash stock Android to it (tried once, failed, any links to tutorials for this specific model are appreciated) or more likely, use my PFSense & IoT WiFi to block its access to the outside Internet.