DockerCon 17 Europe happened in Copenhagen from 16 - 19 October and I got to be part of it. Some thoughts. 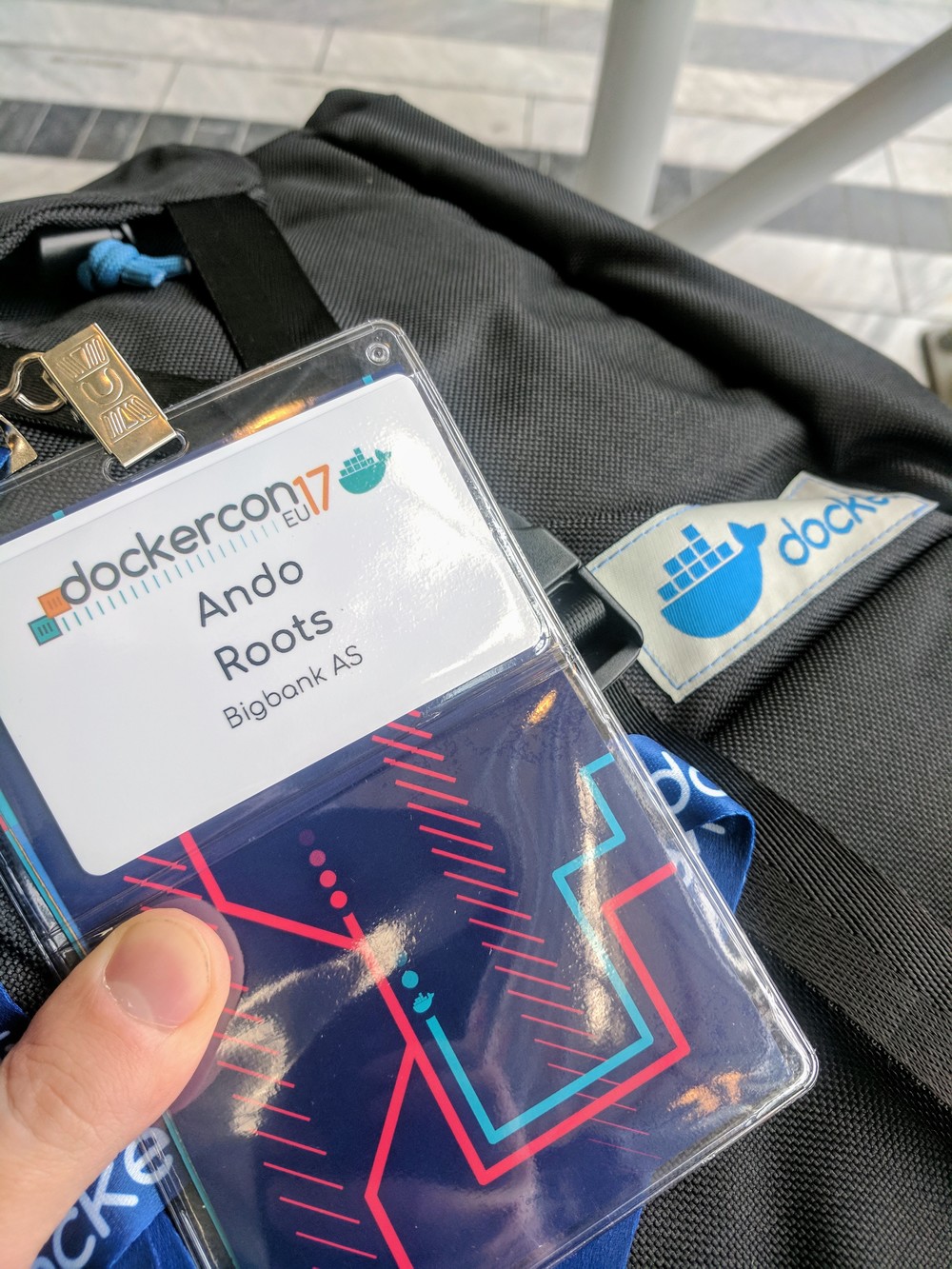 Opening keynotes on both days focused very much on (over) selling Docker Enterprise Edition to the audience, mostly through its “MTA” - Modernizing Traditional [Legacy] Apps - program. Docker, Inc. really wants people to buy its products and (partner) consulting services and to get them on the Docker bandwagon.

You take a traditional, legacy app, that ticks away in some VM and you Dockerize it. Then, run it in a Swarm or Kubernetes cluster and benefit from higher resource utilization and security. You won’t have to refactor the application, Dockerization is seamless. 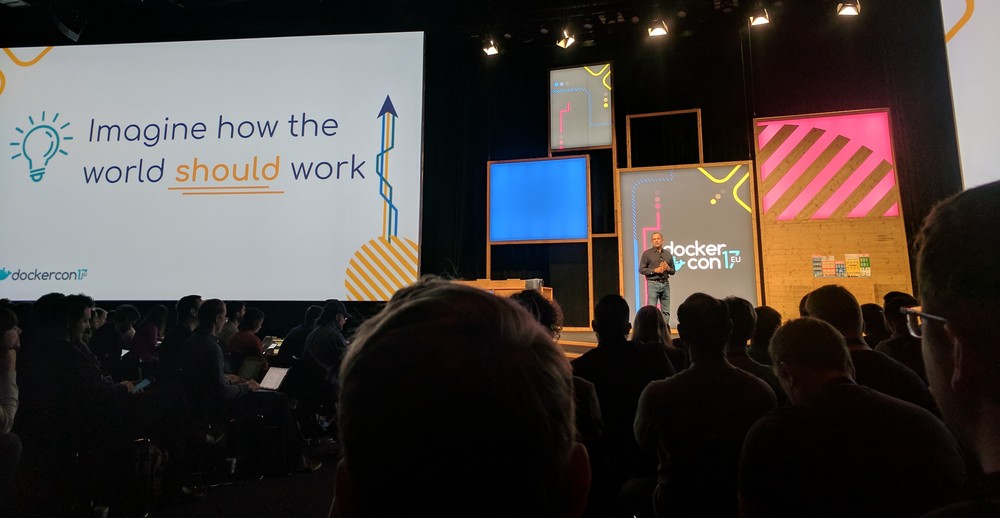 IT budget is 80% maintenance, 20% innovation. Docker explained that money for consulting services and Docker EE could be found from the 80% maintenance budget, because converting traditional apps to Docker actually saves money due to better resource utilization.

How do you audit containers? Say you have a Kubernetes cluster in production and an attacker gains a foothold. How do you know when it happens, what happened?

Enter Sysdig Secure. It’s a paid product that hooks into kernel syscalls of the Kubernetes host and is able to see everything that happens on the machine. An admin configures a bunch of rules, like “files in /usr/bin should not change” or “outbound network connections should not be opened” and when those rules are violated, an alert is sent. Administrators are able to see X seconds into the past and future, to determine exactly what happened:

It’s a very powerful product; I was quite impressed. Sadly, it’s paid (not usable in my personal projects) and pricing details are not clear. However, for enterprise settings, it seems ideal for container security monitoring.

I’ve seen Docker images of 700+MB, where developers have “just used Ubuntu” as their base image while Alpine would have worked, too. It is important to understand how to build Docker images that are small, because they build and pull faster and consume less disk space.

@abbyfuller on how to get devs to care about disk space: "Put devs oncall. You build it, you run it... Because no one wants to wake @ night"

Technology is easy. Culture is hard. How can we get folks to work together and not to build silos of dev vs ops? This is still a mystery to me. 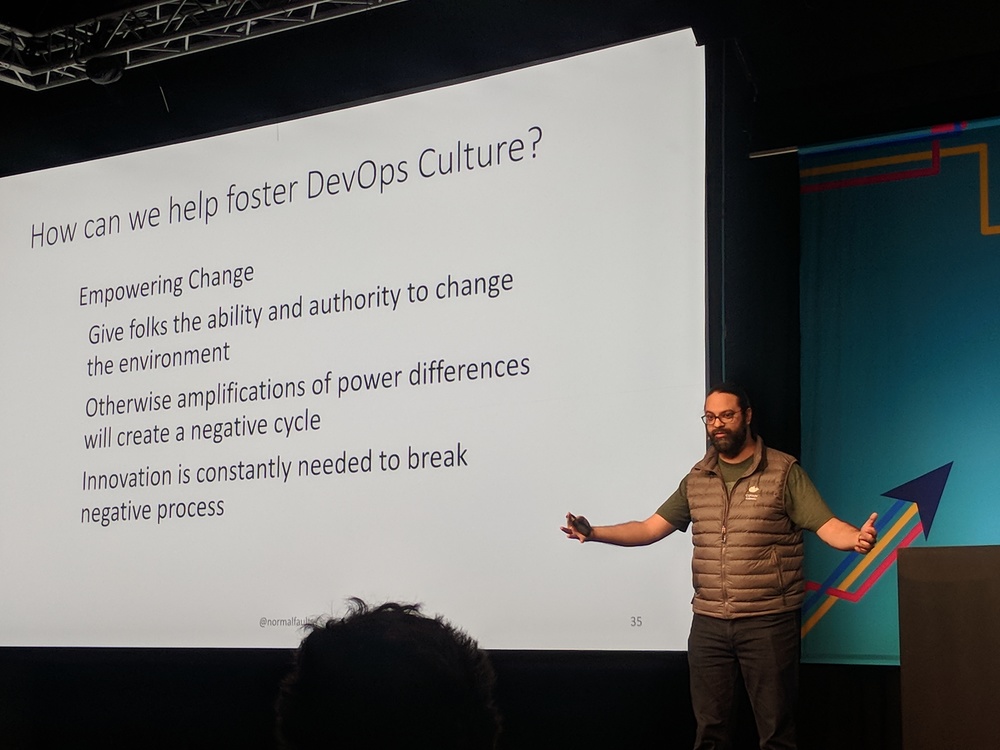 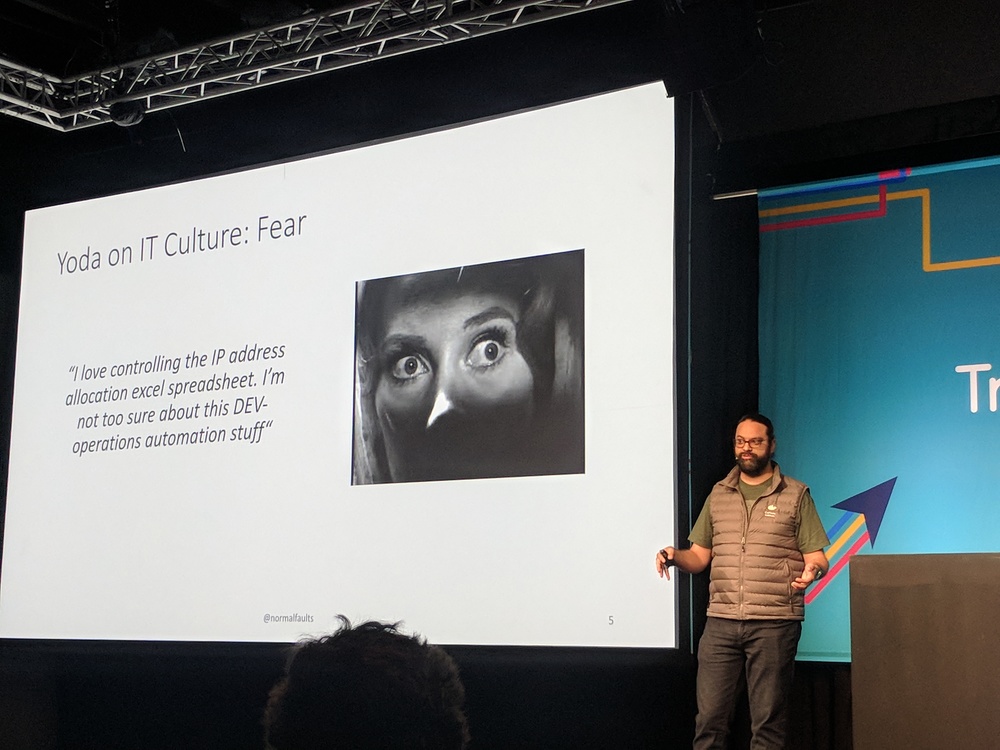 We don’t usually think about supply chain attacks. We should. 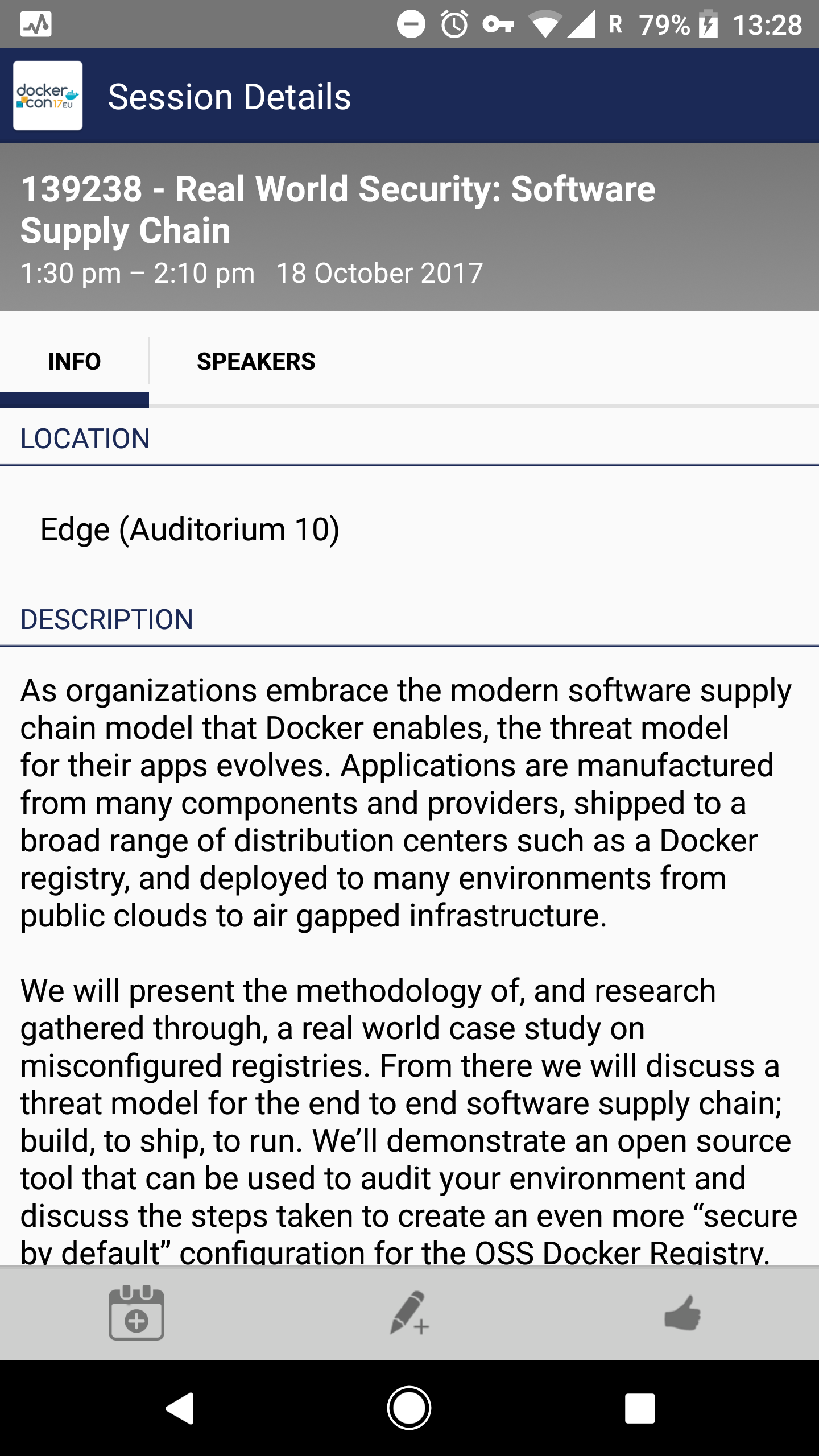 Without good and usable documentation, your project will not fly far. A readme file and/or manual is needed for both open source as well as in-house projects.

@lifeatbigbank Absolutely loved my first #DockerCon and seeing the people who make Docker happen. Will go home with ideas and inspiration. pic.twitter.com/UzXcdZq0gS

Overall, the conference was educational and enjoyable. My three takeaways: 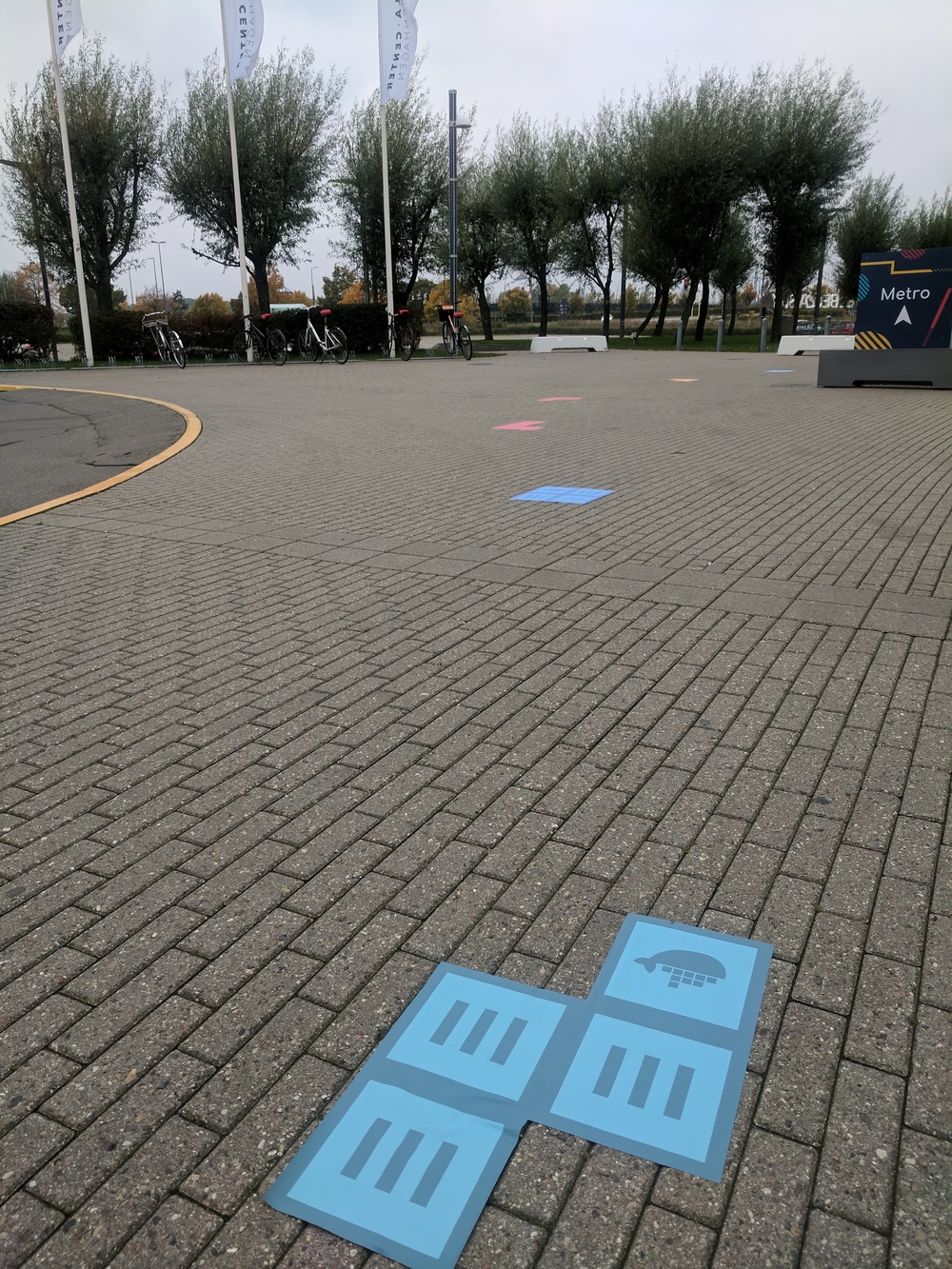