I was in a shopping center and a cheap children’s toy - they call them “laughter bags” - caught my eye. It is an electronic audio player in a “cute” bag. You press on the bag and it plays a loud laughing sound. The first of April was almost upon us and I decided to use this to prank my colleagues.

The bag contained some padding foam and a white box which housed the electronics. I took the box apart to get at the internals: 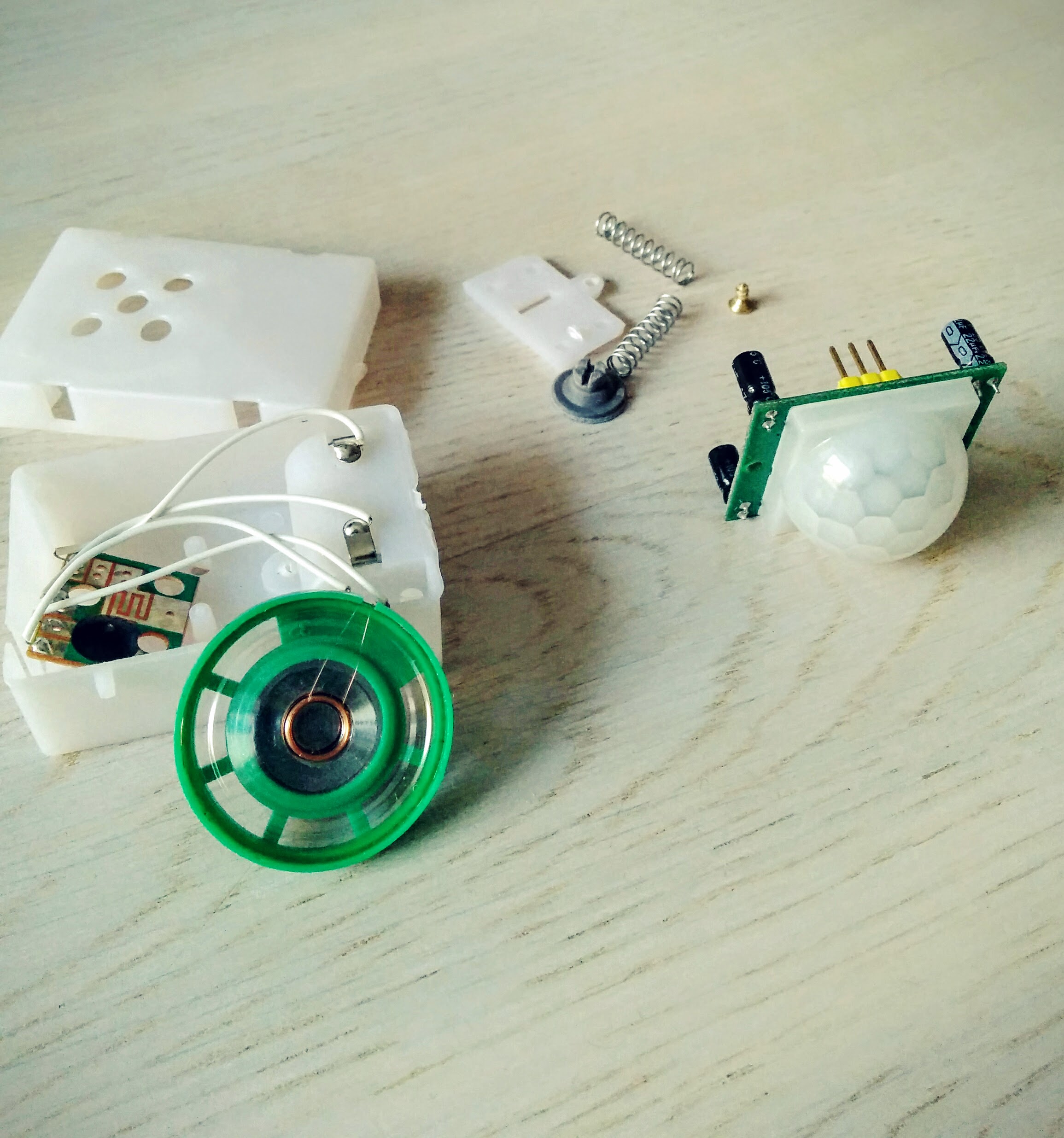 The trigger for the bag was a mechanical pressure switch. I quickly identified that I could remove the switch and achieve the “activation” of the circuit by feeding a HIGH signal into one of the input leads of the IC, rendering any mechanical stimuli useless and allowing me to use digital logic to activate the laughter.

I added a small motion sensor module and hooked everything up with alligator clips to test my new setup. The motion sensor had three pins: VCC, GND and OUT. The OUT pin would go HIGH for a second or two whenever the sensor discovered movement. This matched perfectly with the expectations of my sound module. 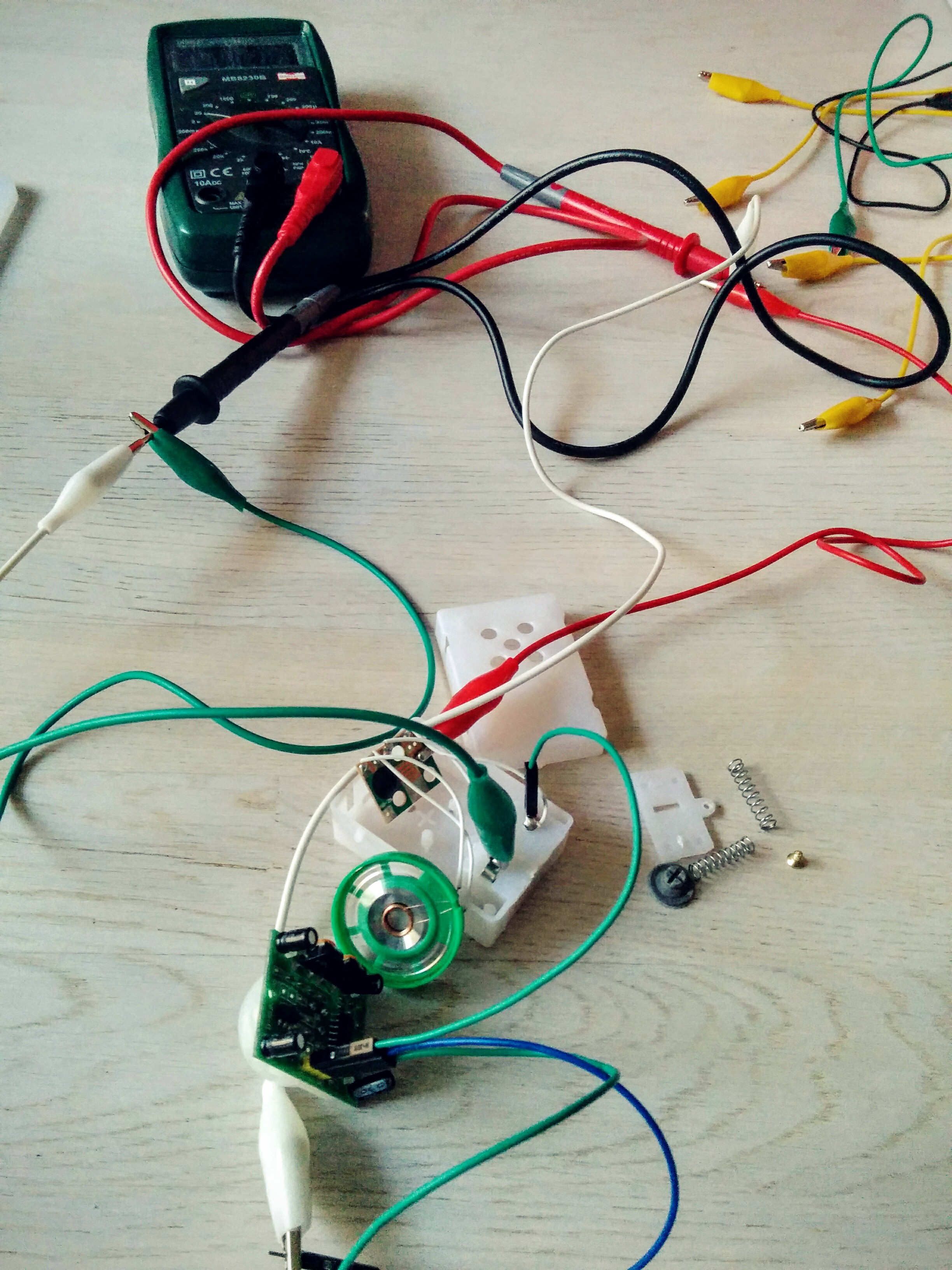 The prototype was a working motion-detecting circuit that would play a very loud, very annoying sound whenever motion was detected.

Next, I soldiered everything together with a couple of extra wires: the motion sensor and the sound module would both draw VCC and GND from the battery pack and the output of the HIGH signal from the PIR sensor would go to the mechanical switch pin on the sound IC. 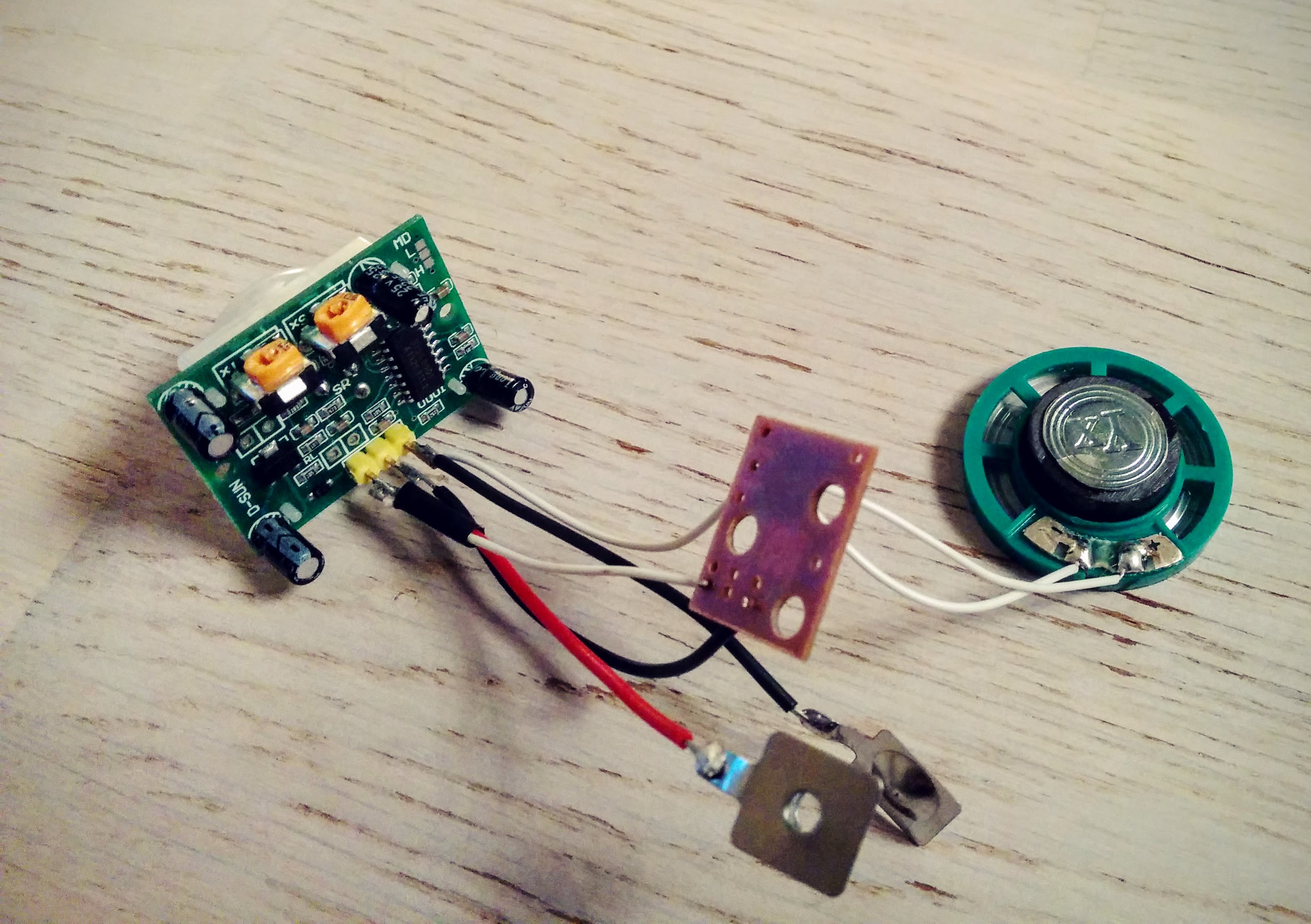 For the packaging, I took the first suitable enclosure I could find, which turned out to be the box for an Apple Trackpad. 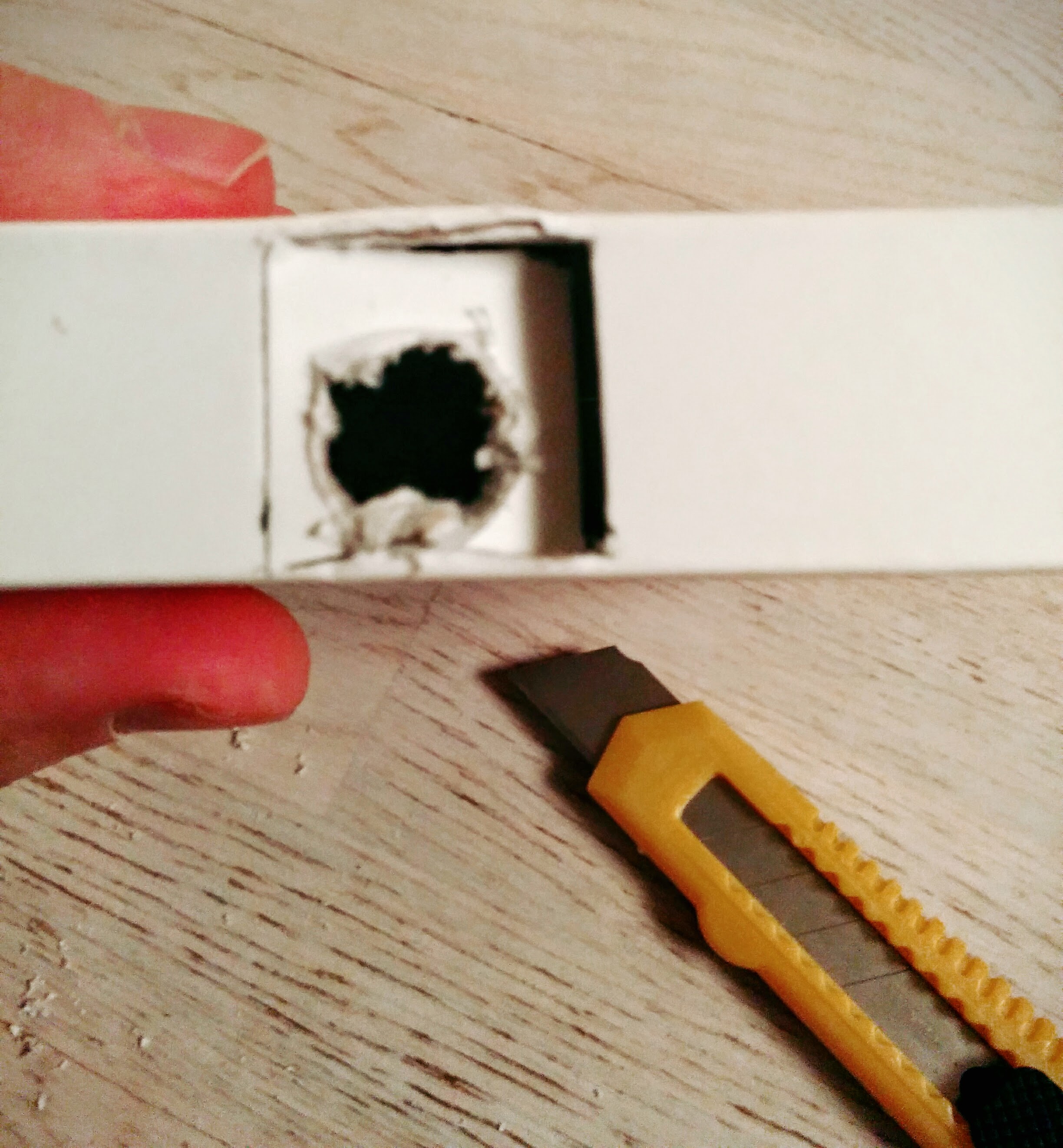 I cut a hole for the PIR sensor and taped all components to to the inside of the box. I superglued four rubber legs to the top of the box to make deployment easier. I’ve learned some things; no body parts were accidentally superglued to one another this time. 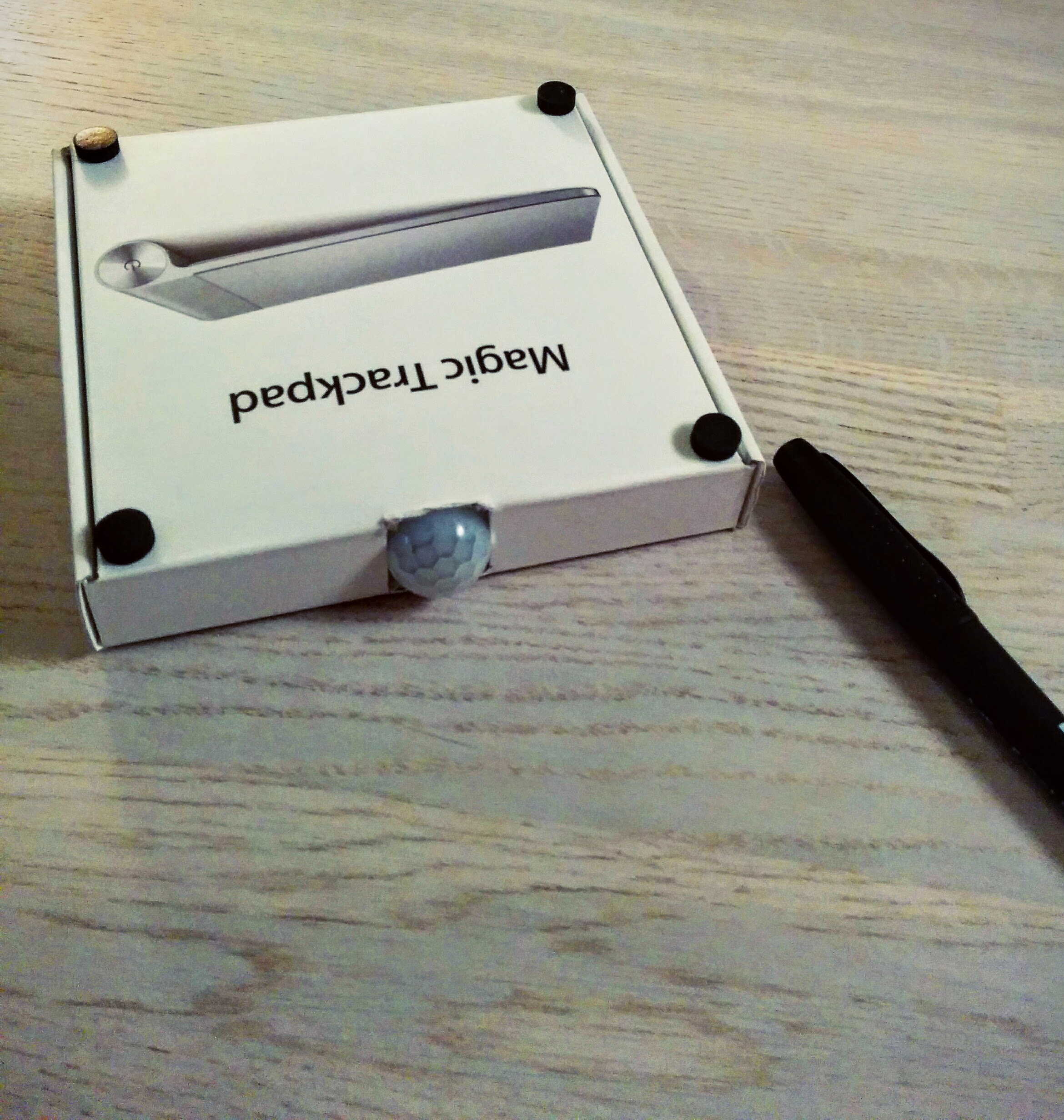 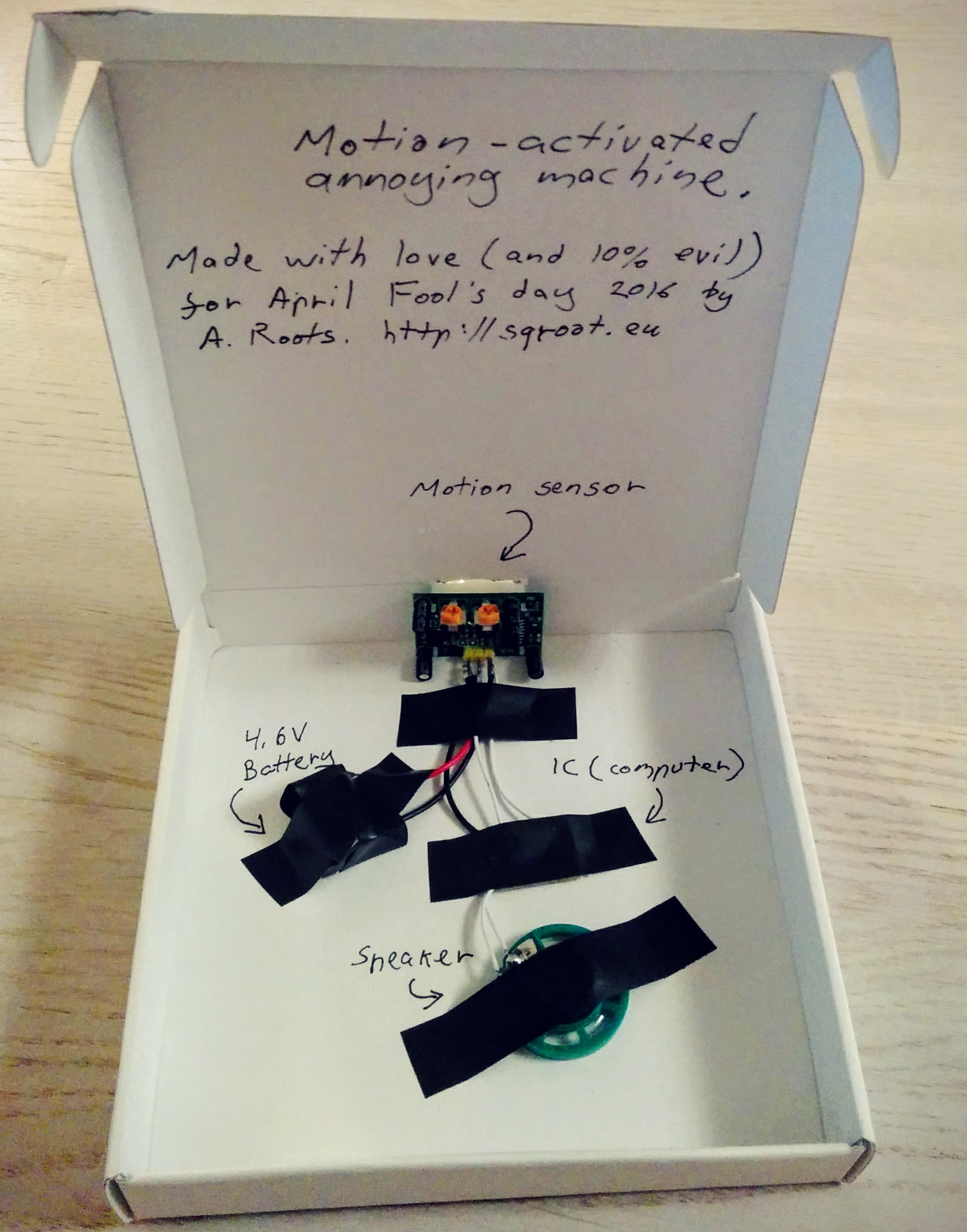 The project took two hours to complete. The next day - the first of April -, I went to the office early and installed the device under my target’s desk, with the motion sensor facing her way. She would sit down and hear a loud laughter whenever she moved. 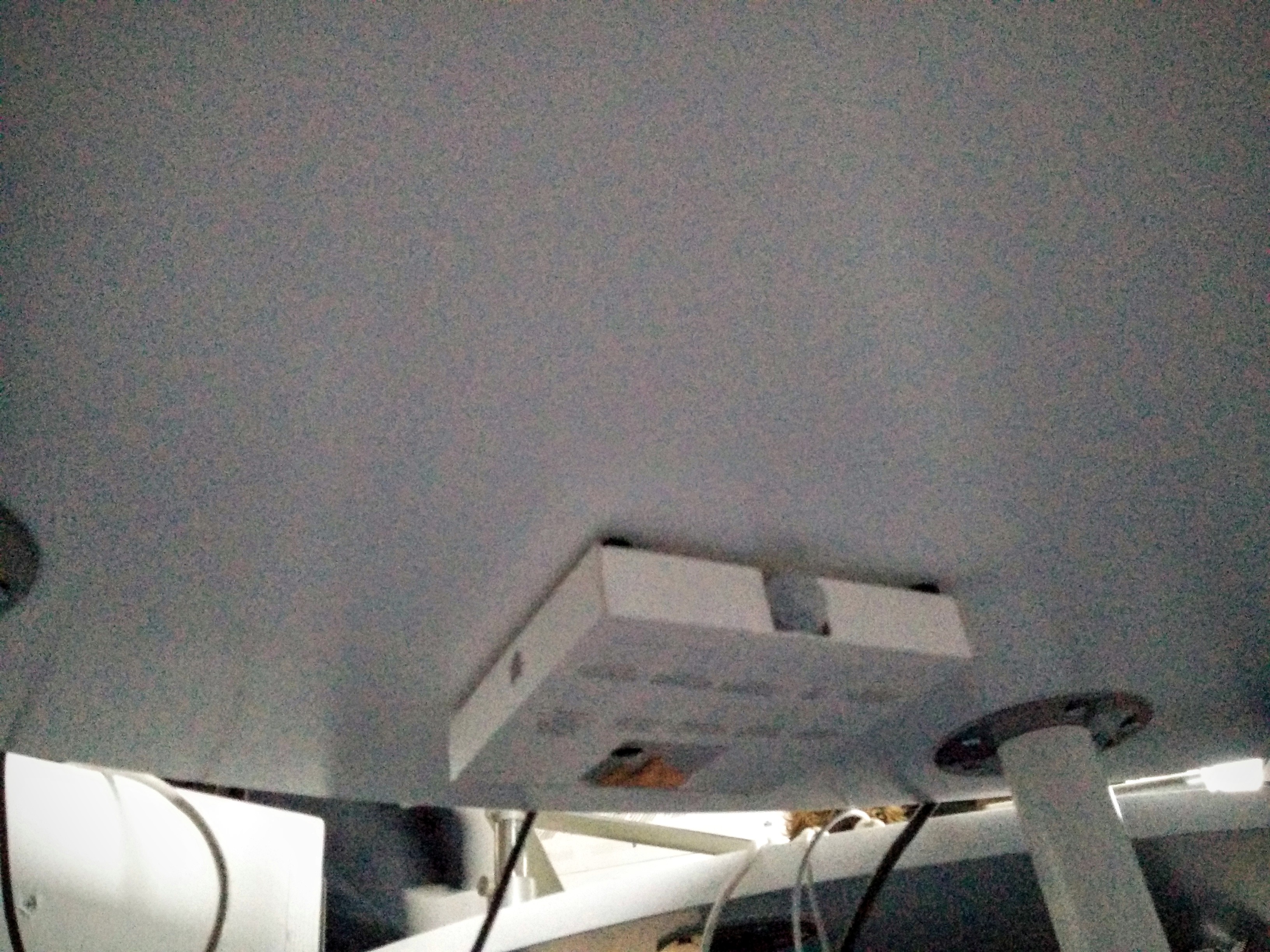 Unfortunately, it misfired: I think I had configured the motion sensor to be too sensitive and it triggered while people were walking by. Another colleague discovered the prank. The box was returned to me soon after - under my own table, of course.

Nevertheless, I consider this to be a quick and easy prank - and well executed, too.

No code or schematics for this project.