It is widely recognized that an interruption into a creative process causes loss of concentration and productivity.

This is especially true for software developers who are “in the zone”. The general theory is that most interruptions - however short - destroy the mental model of whatever the developer was currently working on and it takes additional time to get back to it. 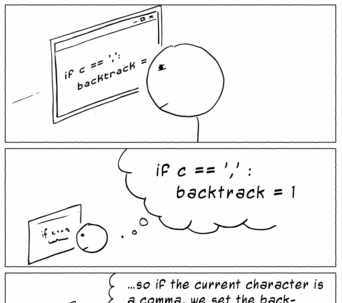 A programmer takes between 10-15 minutes to start editing code after resuming work from an interruption. (Parnin:10)

Paul Graham argues that programmers operate in a so-called maker’s schedule where they need long periods of uninterrupted time to really focus on the problem at hand and do their tasks well. Yet it seems that interruptions are an unavoidable fact in our lives as developers (working from an (open) office).

I’ve recently found that my productivity suffers quite a lot and decided to investigate and track the number of times I was interrupted during a month (two sprints). After all, you can not improve what you do not measure.

This is the summary of the data I collected.

I recorded most interruptions from 15th of July to the 10th of August 2015 using Toggl. Unfortunately, there were interruptions that went unrecorded - small, minute breaks of concentration either external (answering a question from Fleep) or internal (I really wanted to browse Reddit).

The recorded times do not take into account the time it takes to get back on the previous task. For the summary reports (below), I’ve rounded times into full hours. Unless otherwise noted, I work with sums - the total numbers for four weeks.

Interruption: something not planned into the sprint. A server that blew up (out of HDD space) and needed fixing, someone asking for help with a problem (explaining / pair programming), unscheduled meeting etc.

I exported four weeks of time-tracking data from Toggl. Let’s take a look.

During a month, I spent a total of 30 hours (sum of 70 logged interruptions) doing something that was not planned into sprints. 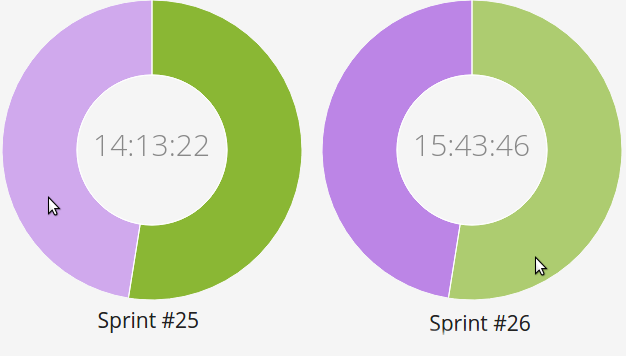 It seems that the amount of time I lost each sprint stays roughly the same. 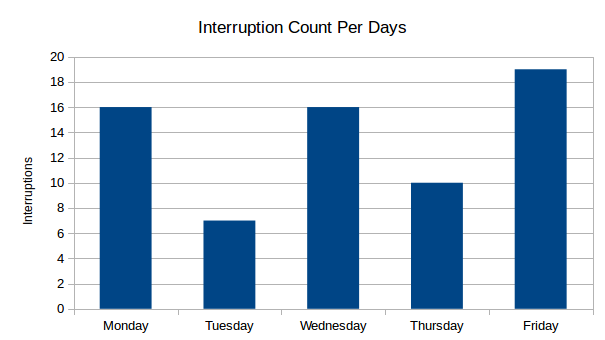 The day I get most work done is Tuesday. Fridays get almost three times as many interruptions as Tuesdays. On average, I am interrupted 3.5 times per day. 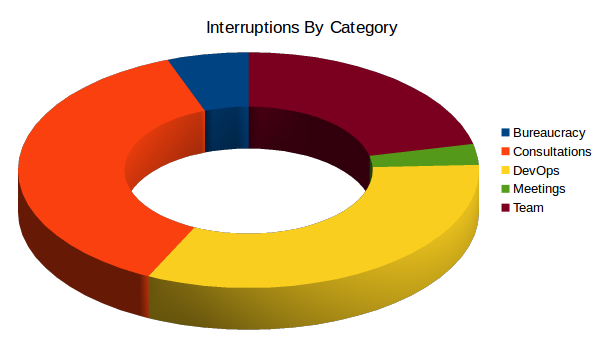 I tagged each interruption into one of the following categories. 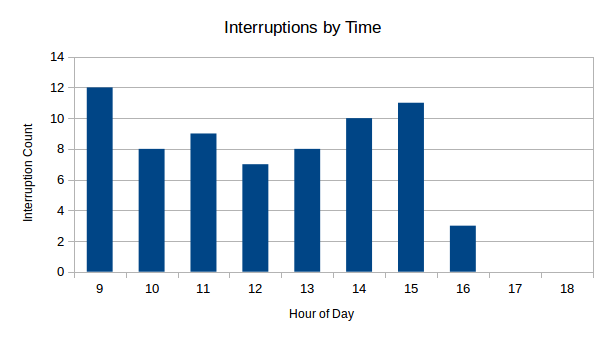 I will most likely be interrupted on a Friday at 09am for 18 minutes by someone asking for tech support.

Interruptions happen. From the data, I could claim that I lose about 3.5 * 18min + 3.5 * 15min ≈ 2h every day. Data aside, I feel that the actual impact is way higher as I do not remember the last time I could calmly “hack away” at something and really immerse myself in the problem.

I started in my current company as a developer, but my responsibilities have smoothly transitioned more to the devops / educational / support field. As such, I can not just make myself completely unavailable and not care if a server blows or a developer is lost in the complexities of Bamboo.

We’ve had two suggestions on how to mitigate the impact of interruptions:

Both solutions have potential. I’ll probably experiment with the second one.

From the data it’s clear that most interruptions are either DevOps or tech-support related. I can reduce those interruptions by investing more into DevOps - making systems more resilient (implement monitoring, auto-restart policy…) and by training others to have a larger understanding of DevOps, so they could solve their smaller problems on their own.

On that note, I (we) should also promote the idea of not being helpless: as developers, we constantly face problems and unknowns. We should be able to handle most of them by ourselves (and Stack Overflow).

For example, Composer. It might take a developer 2 minutes to ask me what’s the difference between composer install and composer update or it might take her 10 minutes to Google and read the blog article which explains it in more detail. The former is quicker for her, but it takes 15 + 2 minutes from my time and encourages the mindset of not solving ones own problems.

yes, it is a long text, what is the solution? - (from a Fleep chat)

I feel that people have allowed themselves become too helpless and/or lazy. Everyone wants the quick fix, not realizing that if they won’t spend some additional time actually researching and understanding why some problem arose, they will be just as helpless in the future.

Besides those two insights, I have no real solution. Developers struggle with interruptions all over the world. If you have found a way to deal with this - please let me know.

I take this opportunity to apologize to You, the co-worker to whom I’ve caused (and will be causing) numerous interruptions.