IT-ÖÖ (IT Night) is a fun, statewide event where kids and teenagers gather in youth centers all over Estonia for one night (06pm - 08am) to spend time with each other, the mentors (IT students) and other centers via a video / radio link with the goal of learning about Information Technology. The event happens for the third time and this is my second time participating. The topic for this year: prepare a video / audio / poster advertisement as to why IT is the best calling to choose.

Schedule For The Night

The following is a recap of events, from my point of view, from one of the many participating centers.

All volunteers were invited to an introductory seminar on the 27th of February. The schedule for the night was introduced and mentors were matched with youth centers. I ended up in Roela Youth Center along with Madis Vellamäe, a fellow IT student / developer who flew in from Japan a few days before the event and was still jet-lagged (and the designated driver for the next morning).

I was picked up by Madis and we arrived to the venue by 5pm. One thing you don’t notice when living in the city is the absolute stunning beauty of Estonian wintry landscape, something I could observe during the ride over. 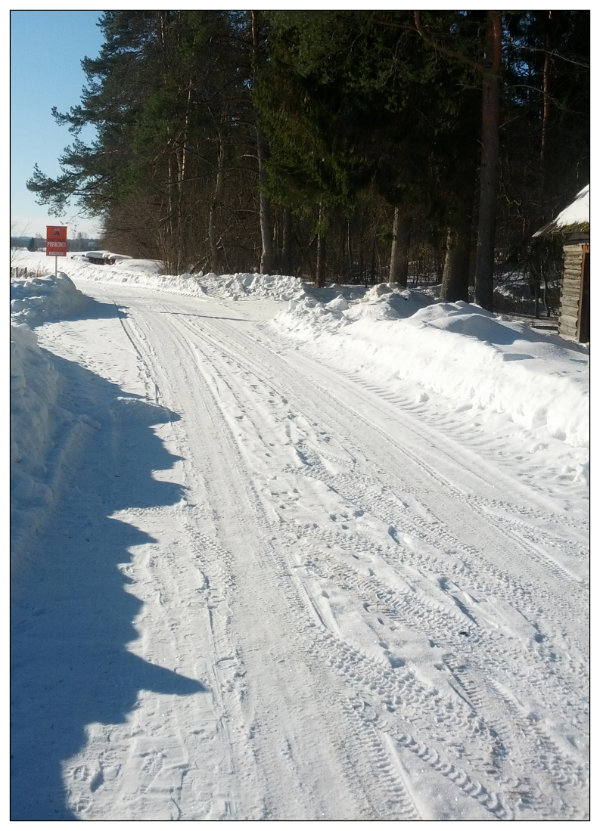 The youth centre was small, but surprisingly modern and comfortable, with good tech-equipment and furniture, in short, a perfect place to do some hacking. The essentials - coffee, couches and power strips - were also accounted for. Maire, the woman in charge for the house and the kids greeted us with a tour and hot coffee.

We did the most risky bit first: setting up the video a) receiver (a projector screen) and b) transmitter - a webcam / mic / laptop combo. From previous experience, it’s important to do this as early and as reliably as we possibly can. Integrated audio-visual systems (software, hardware and the network) have proven to be able to throw tantrums from time to time and it’s important to test them out ASAP. Still, Murphy applies and so it was that we broke the lens of the webcam (to be fair, it was already in a poor state) and had to search for a replacement. 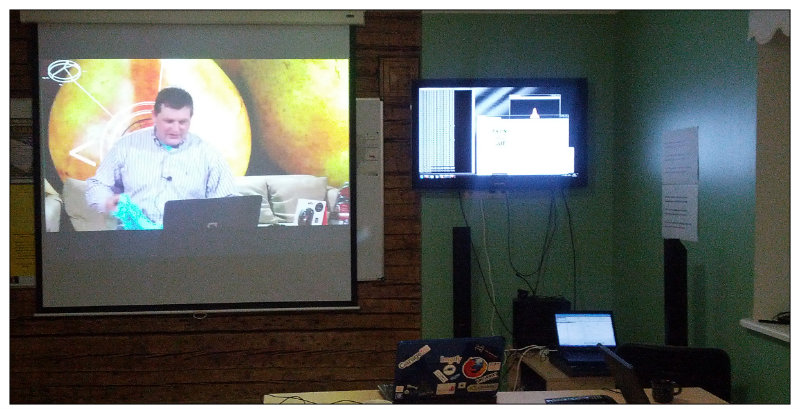 (above) Studio feed on our wall 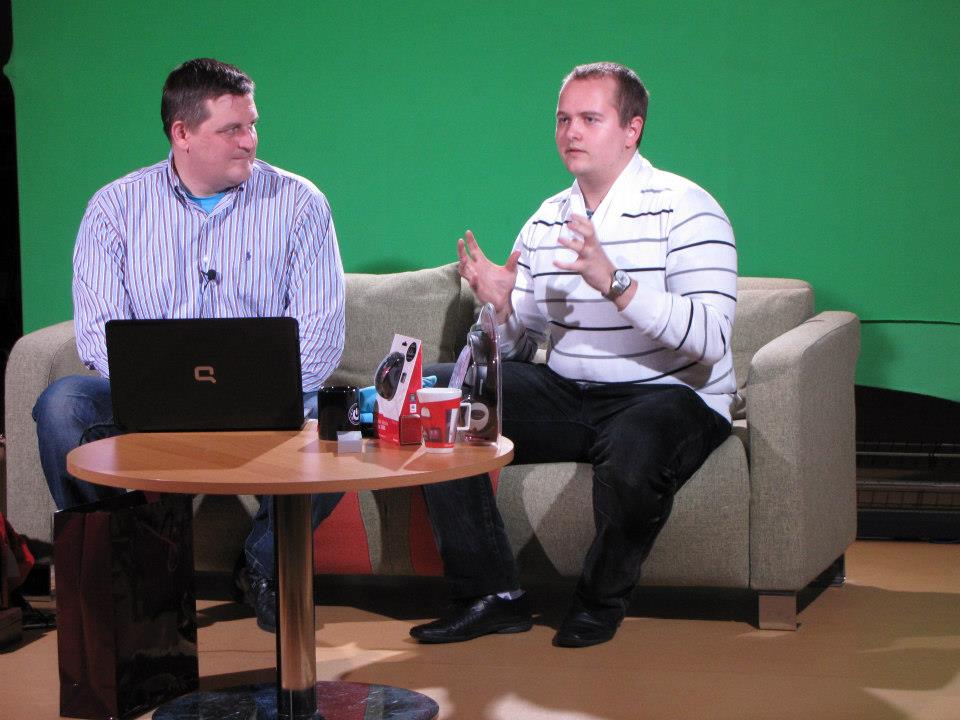 (above) A picture from the EIK FB album, green-screened studio

The studio was set up @ IT College, largely due to the help of the media club and it’s video stream was displayed on the wall for the duration of the whole event. Indrek, the host, was on air most of the time and looked as haggard as I felt in the morning - but managed to stay energetic nevertheless. The host talked about IT, called centers for live interviews and showed advertisements as they were completed.

We used the large-screen TV on the wall as an indicator for the internet-connection, displaying the output of

The internet was a bit jumpy (we actually missed our first scheduled live-broadcast window because of this) and it was amusing to see the ping output fail and the video stream falter a second later, only to be restored in a few moments. Maire called the local ISP at 8pm and things got better. For the record, dear ISP - you now have two experts to validate that everything is not quite right and the matter should be investigated further. To your compliment, however, the network did not fail completely and we didn’t have to resort to emergency measures (unlike last year at Kambja) to stay broadcasting. 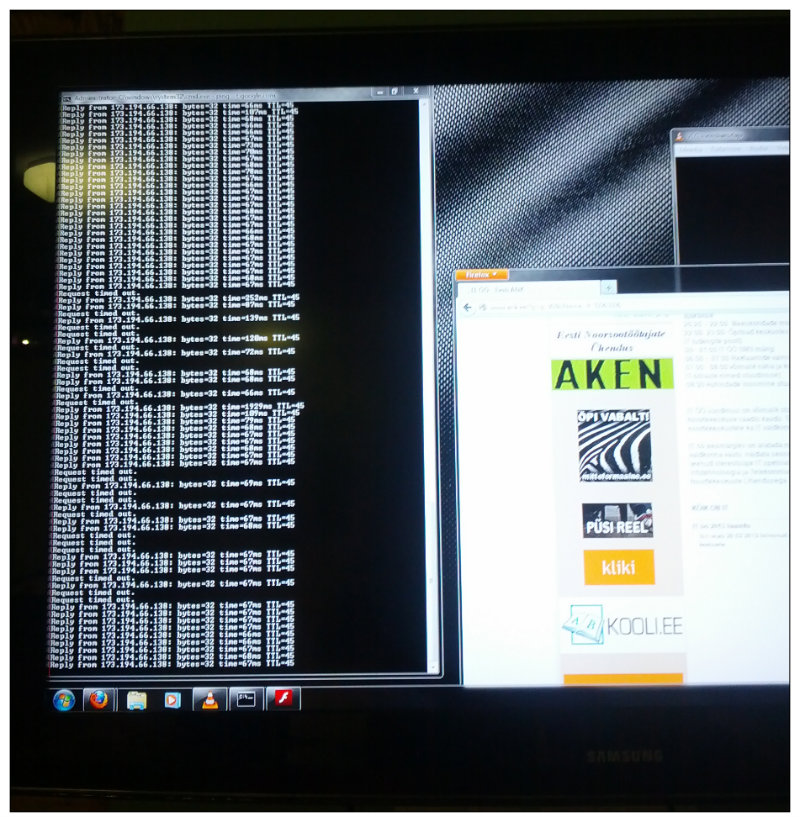 (above) We had a ping monitor… literally.

The kids who arrived were looking to be between the ages of 13 - 18. Three girls versus around 10 boys. Some of the “outsourced” youth centers who were supposed to gather to the central site of Roela didn’t make it. Maybe it had something to do with the semi-popular band playing in a nearby pub.

The young split into three groups - the girls, who were above it all and mainly concerned about watching TV (hey, I’m as interested in The Joy Of Teen Sex as anyone!) and being judgmental about the childish behaviour of some of the boys, the few dudes who could be bothered enough to ask additional questions and actually be interested in doing what we asked them to do and the cool ones who took it as their mission in life to macho-up and impress both each other and the female ones. I’m exaggerating, but that’s how it felt in moments when I didn’t want to be a volunteer youth-worker.

I’ve grown up a lot since leaving home, starting college, work and having my first encounter with the opposite sex. I can recognize and reason out some psychological behaviours in a group / individual level (it also helps to read a lot and have a friend with an interest in psychology). Having said that, it was an educational and somewhat concerning experience to be an outside observer and see how life in a smaller community hasn’t changed a bit since I experienced it; how the ideas and ideals of what it means to live a fulfilling life are distorted by the social pressure of being cool and how we shape ourselves by the friends we choose.

It was difficult to get the people to focus on the stuff they signed up to do. With the willing team, it was easier, but I had to force myself to visit the next room, where the cool ones had separated themselves by the pool table. I like working with people, but still find it challenging to reach to the rebellious ones. I guess only a very few charismatic people can do that with the presence of their personality alone and I just have to learn to deal with it.

Two things that bugged me quite a lot: the “official” radio for the event, KRaadio was playing from the home-cinema system, but kids still put on their own “cool” music, often from several different sources. Yes, everyone, including me, thinks their music taste is good (or the best), but at times some restraint is needed. Thankfully, when asked to behave, they did. The other thing was the quick loss of focus, but that is only to be expected. The ones who found IT / media interesting were able to focus, those who didn’t quickly fell back to their routine of computer games or watching TV.

Also a valuable lesson - you can not do improv/social games without preparation and in the span of ten minutes, without first grounding the tension / insecurity / fear of the participants. We do warmup exercises for an hour with Improstuudio (improvisational theatre group by Improgrupp Jaa!) for a reason. The goal of the introductory games was to loosen people and get comfortable with spending the night together (you know what I mean), but there weren’t enough strangers (as mentioned, some kids from afar didn’t make it) and I kind of screwed up by letting my tension show. The instructor should be calm, confident and energetic.

The workshop went quite well. We had decided to teach basic programming with Scratch; Madis prepared and held the lesson while I helped with answers and explanations to the ones who were behind or wanted to go off on a tangent to chase their own creative ideas - and there were creative ideas. Once the kids got a hang of what Scratch could do their creativity was unleashed. One kid had dragged a whole functions worth of code blocks, having multiple sprites and simultaneous actors (in technical terms, for-loops, arrays, counters and and asynchronous code, not that they knew that). The best works were uploaded and can be viewed online. I learned that you can’t teach programming to kids like they do it in universities - the young, in general, just can’t focus on lectures. Instead, you have to give them the tools they need and let them explore the world on their own. 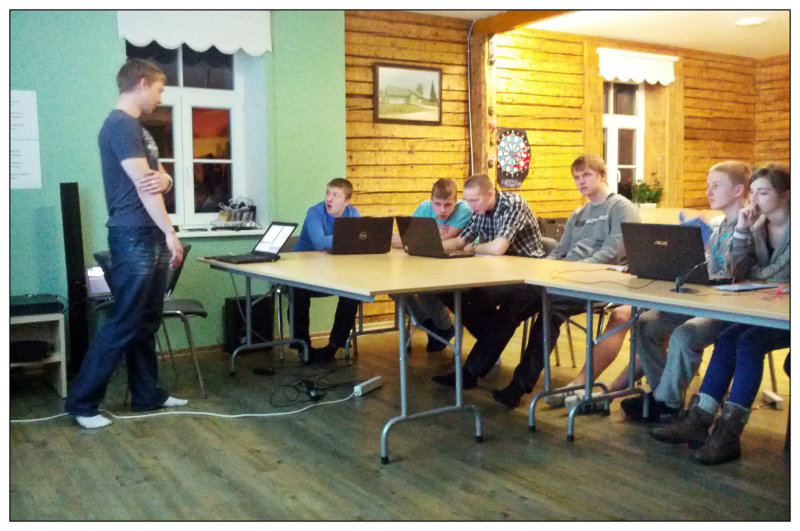 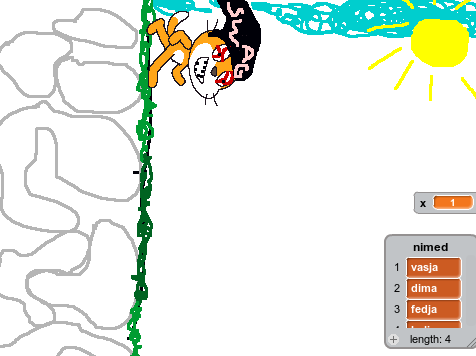 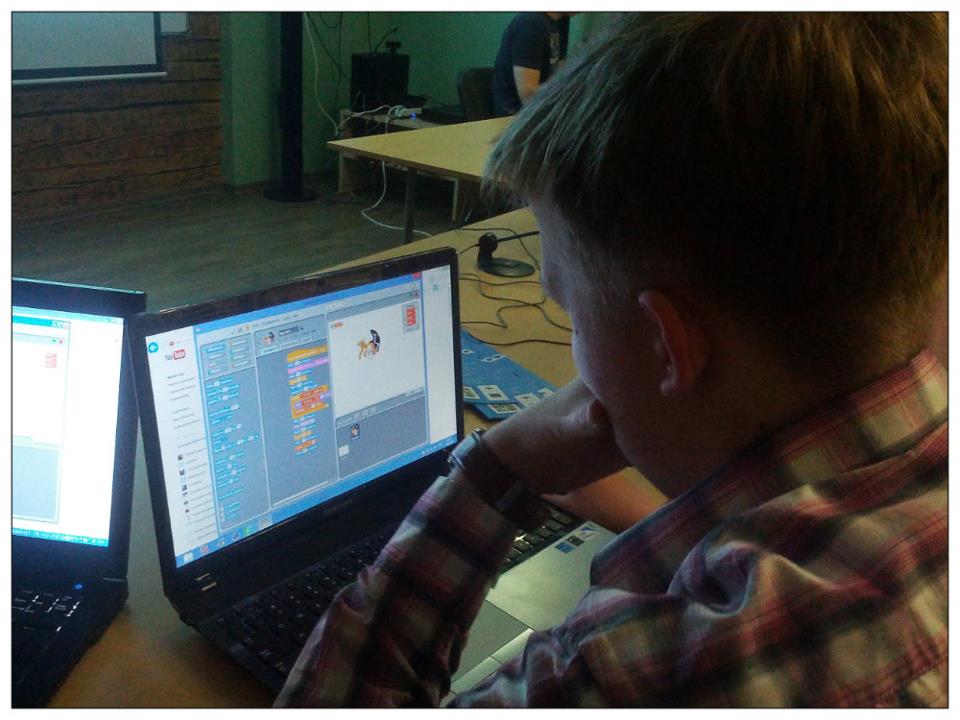 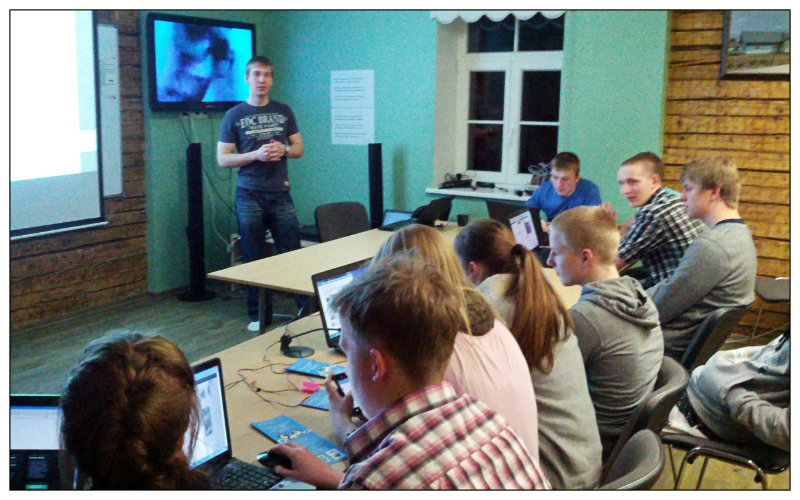 The SMS competition drew people along quite nicely, although I’d have prefered to see more team spirit and focus. The system didn’t crash, which is a first, but there were still misunderstandings in the usability department.

I’d taken my box of electronics parts (breadboard, resistors / LED) and instructions with me with the hopes of introducing basic electronics to anyone interested, however, I decided not to take it out (in the end, I did, but as predicted, no-one showed any interest [to be fair, I didn’t push the subject, either]). That was a big let-down. I had decided to leave my PI at home, maybe that would have attracted some interest in embedded programming. I still hope to teach basic electronics, tho - the best way to learn something new is to teach it. 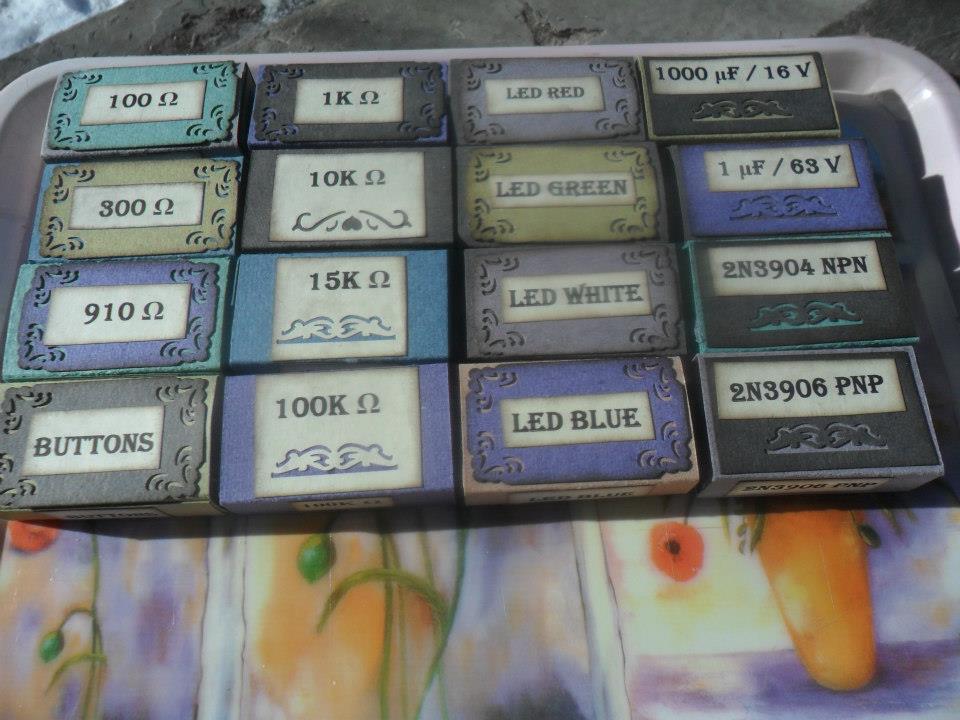 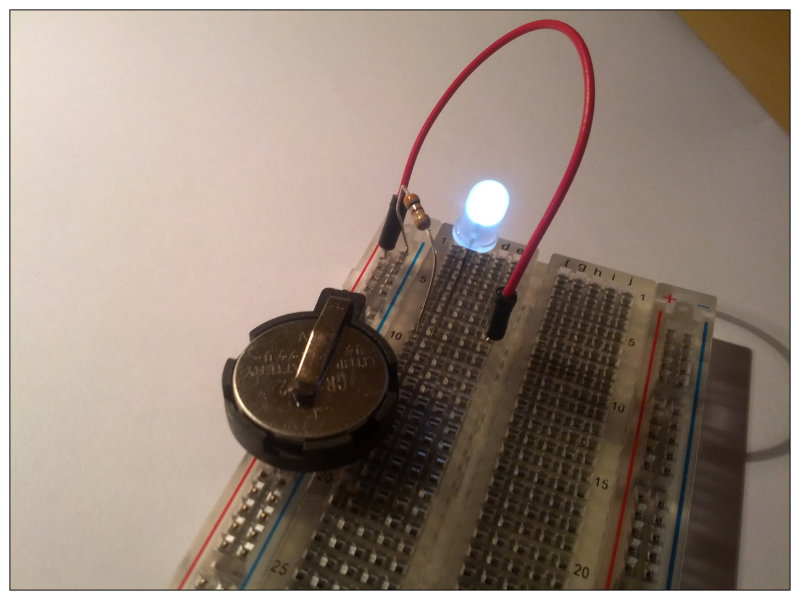 Catching Some WiFi In The Night

The second broadcast window, at around three am in the morning, came with a twist. The kids wanted to build a fire and grill and soon enough the flames were illuminating the cold, snowy night. I had Wifi Analyzer app on my Nexus device so I got it out and instructed one of the kids on how to find a broadcast location that’s closest to the fire with the strongest signal strength from the house. A good enough spot was found so that’s what we did. One kid held the laptop while I operated the webcam and external mic and the live broadcast from Roela, at 3am in the night with 10-12 kids and ~ -12 degrees of cold, on a snowy Estonian landscape, live to the state, came from by the fireplace where sizzling sausages were grilled. 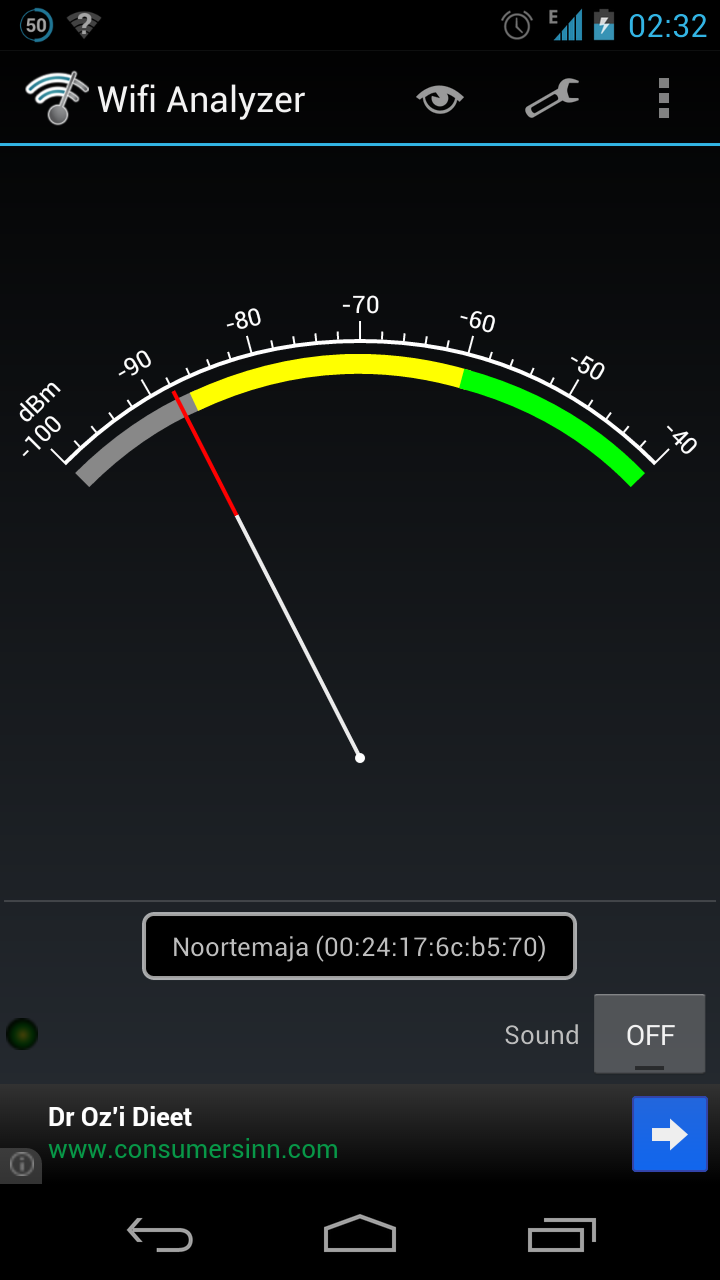 (above) Screenshot of the Wifi Analyzer app

Had the participants showed more focus and interest I’d have develop the idea further: one workshop for the CISCO courses in IT College involves locating WiFi jammers with a scanner. It would have been awesome to hold a Hotspot Finding Competition where participants compete on who can locate a hidden smartphone-hotspot with a portable Wifi scanner the fastest. Going around the house with a tech-looking, beepy scanner: very IT.

It was good to see that the main part of the night, the preparation of videos, was taken to with enthusiasm. There were two teams, team one directed a dialogue about IT being all around us, team two went with the technique of stop motion. One team used a video recorder the other a camera, montage was done in Movie Maker for Windows 7. The program lacks green-screen features, which is a pity, because the walls of the centre were oh-so-opportunistically green.

Both videos were uploaded to Facebook in time and the survivors gathered to watch what others had done, cheer and laugh at their own videos when they were shown from the studio and be excited about the possibility of winning an award (which were handed out randomly from the studio).

… and that was it. The kids packed up, some quick cleaning and gratitude and off we went. Madis had managed to get a few hours worth of nap time, which is good, because we didn’t die in a horrible crash on the way back. I got to home and bed around two in the afternoon.

The experience was quite what I expected from last year. A chance to show youngsters that IT is cool. A learning opportunity about psychology and myself. I was a bit crossed at times, but what parent isn’t when puberty hits? Kudos to the organizers and participants. We did something awesome together.

Things To Check Out