The third weekend of May 2012 was the weekend for the first-ever Finland International Improv Festival. I, alongside of Improgrupp Jaa!, had the luck of participating. The following is my (personal) summary of the weekend which is also highly subjective.

Woke up bloody early, packed and met the others in the harbor. Rahel had brought with her a big box of #FIIF T-shirts. Participant shirts read “Go ahead and laugh. I’m a COMEDIAN” and staff told the story of “I’m not funny, I’m just STAFF”. The latter, by the way, proved to be false, because the staff disproved the claim during the next days. 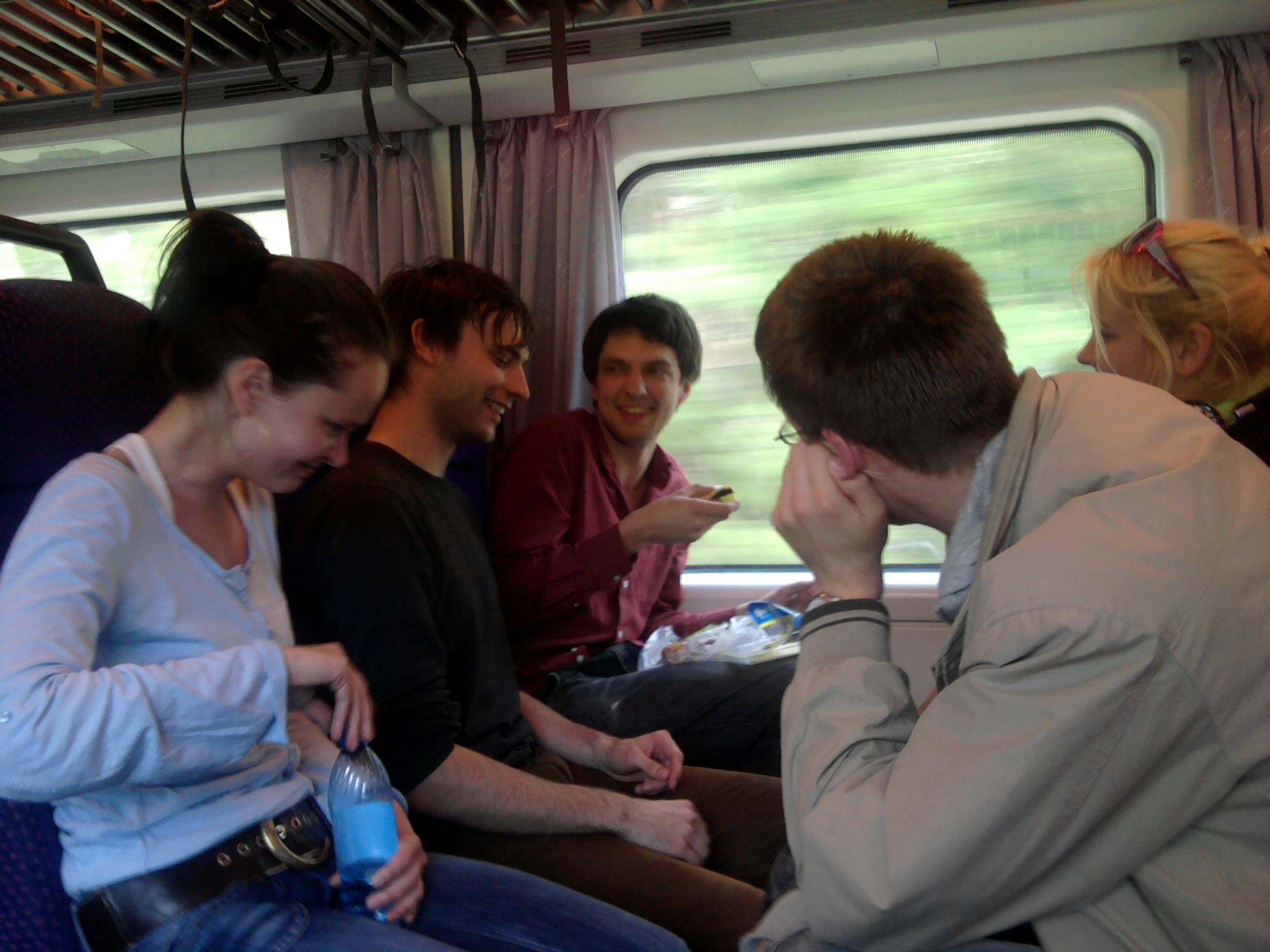 Boarded the big cruise ship (10 decks, seriously?) and walked to Helsinki train station some hours later. Was quite impressed by VR: quality trains, decent service. Martin tested their patience by playing the harmonica in the big, echo-ish station hall and wasn’t arrested. The train ride was smooth, almost vibration-less and the locomotive itself hurtled forwards with top speed of 160km/h. Tampere welcomed us with a downpour and we arrived to the hostel to spill water everywhere.

Accommodations were set up in DreamHostel, a clean, comfortable and affordable hostel in Tampere. A quick lunch and off we were to Ylioppilasteatteri to watch the first performances. The stage was decent, there were stands to hide behind and of course, a door. The acoustics were good enough so the performers didn’t have to shout. 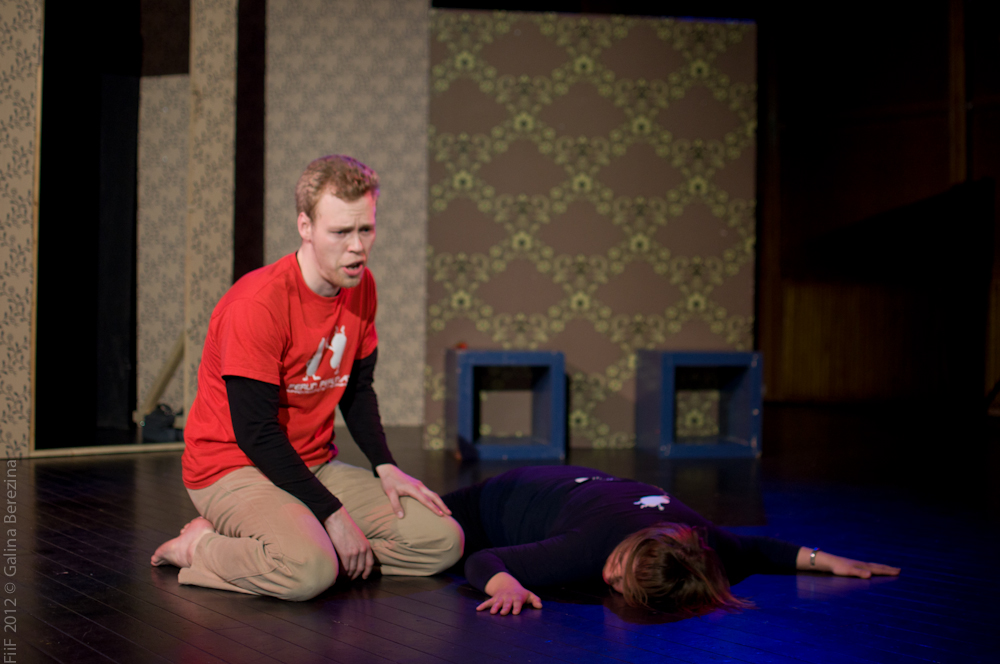 The first to perform were Perun Perunat, who presented a two-person longform. I was quite impressed by character work - playing a preteen is not easy, the same goes for grandfathers. One of the best moments for me was an improvised song where a woman was on a rooftop, pondering suicide. I can’t remember the lyrics further than “Now (this?) is the time…”, but the melody and the general sad atmosphere still haunts me. The duo had a nice chemistry and handled playing various roles/characters really well. The story was a bit suicidal though (was it planned?), with the teen shooting her grandfather and bodies jumping off roofs (at one point, a short intermission was called to count the characters that were still alive). I once saw a play with only two actors in various roles. Perun Perunat did the same, but on the spot. Well done! Snatch Comedy was something completely unexpected. All (mostly) the other teams presented some version of a long-form, but Snatch decided to do traditional short-form games. It. Was. Hilarious. The expertise of the actors was just beyond my level of comprehension. Whenever I see an improv show I look with the eyes of an improviser and what I saw blew me away. The show was fast-paced, the crowd roaring in fits of laughter and the short scenes made me wonder what would happen if they turned into a long-form. In short, the Irish troupe nailed the essence of short-form improv games. 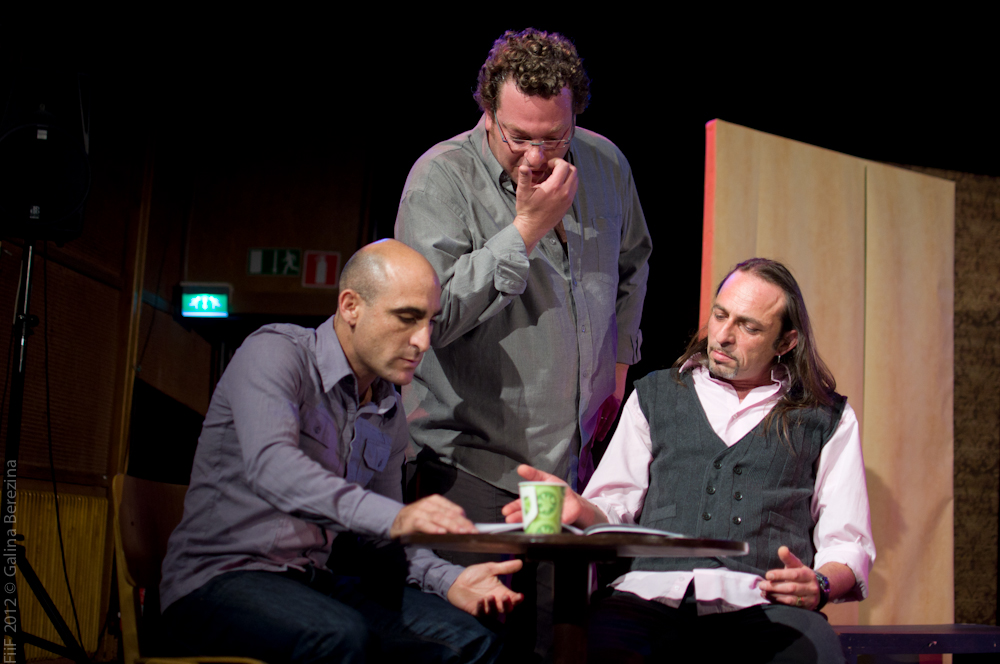 LamaAlpaka consisted of three exotic-looking (in a good way) men from Israel and their long-form grew into a story of a corrupt man who kind of owned the town. It was an unique experience to see the humor and thinking of a less American-influenced group. 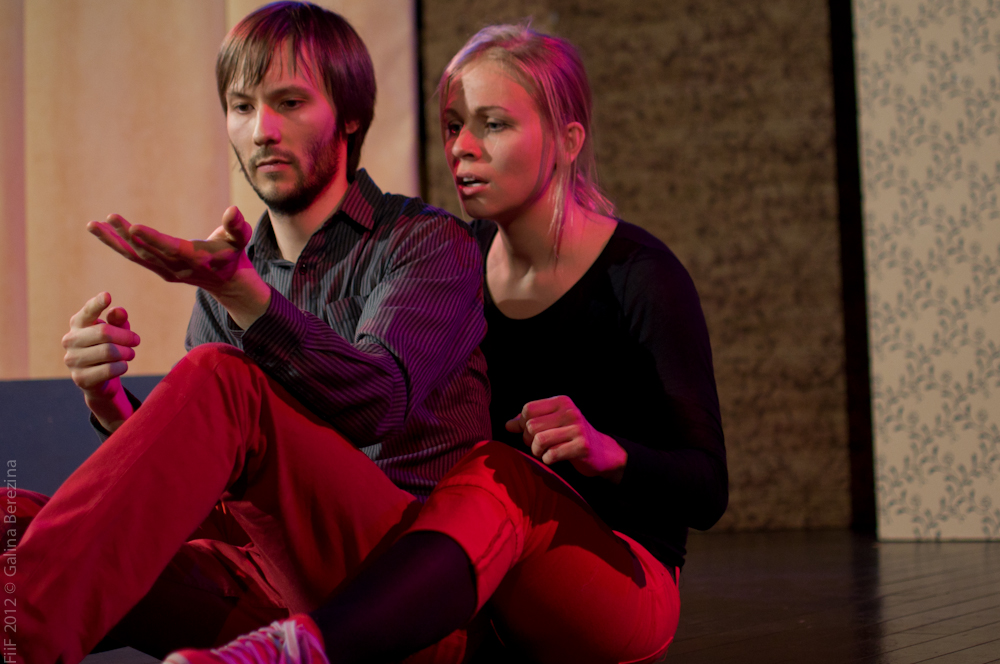 There is not much to say about JadaJada that I haven’t already said, the same praise still applies. The story was of Mike & Mike, a gay couple who adopted a boy, John. The tale had integrity and emotion and it drew me in to the point that I missed a queue to dim the lights (I was on the light board during their show). There was a song of course and I have to say, I’m addicted to improv songs, such a joy to see a singing scene. 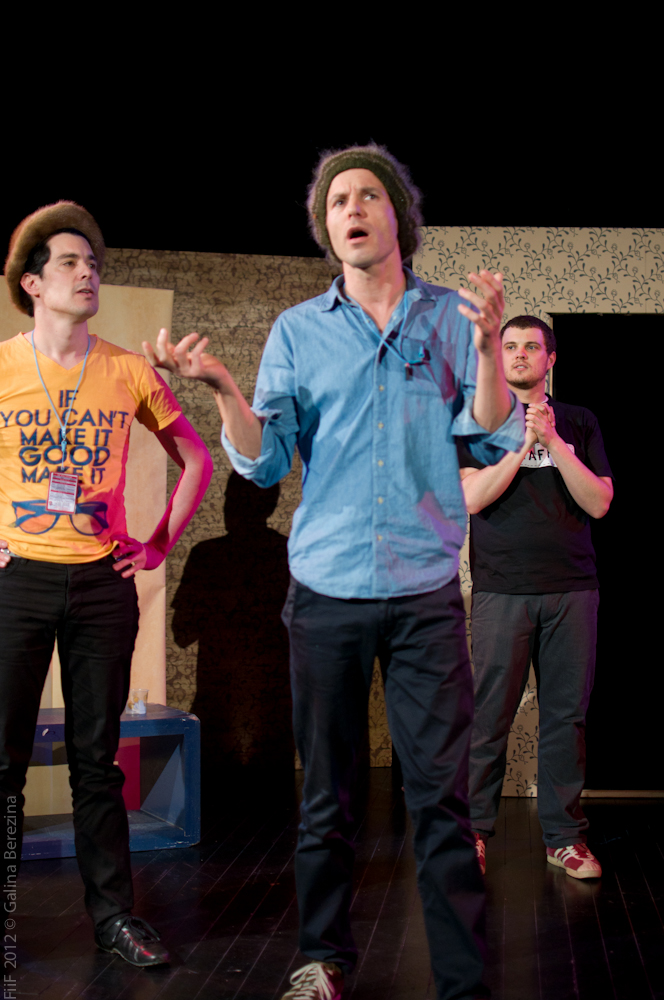 The evening ended with all the groups competing against one another in the Short Form Tournament.  Initial pairings were drawn, with the winner of each round moving on the the next one. There was a list of games to be played (drawn from a cup), many of which were new to some of the teams. Perun Perunat actually cut their scene because the rules were a bit different from the traditional ones and there was some confusion. It was all done with a high spirit of course, because a mistake is a gift.

The teams competed with various games, the audience chose winners and in the end, only JadaJada and Snatch Comedy remained. The title of the audience favorite was awarded to Snatch Comedy for their laughter-inducing performances.

The day ended with everyone finding their way back to the hostel to get some sleep in preparation to the improv-madness of the next day.

Alarm & shower all to early, but no complaints this time. I later heard that some of the teammates were woken with baby noises close to their ears by an unnamed, but benevolent lady… so I’m glad I woke on my own terms. A 20-minute hike through Tampere and the morning kicked off with the first workshop. It’s a pity many of the workshops were on the same time. I’d chosen to go learn more about character building and statuses because I felt them to be one of my weakest areas.

The workshop focused on techniques to get inspiration for character-building as well as some related subjects such as status and memorization. Here be a suggestion to all the unpopular kids in high-schools all over the world: go take up improv and learn about character and status. You’d be amazed on how your life improves. We talked and practiced character building, interaction, memorization, of making life-like characters… and animals. Non-human roles have fascinated me ever since I saw the actors of Helsingin Kellariteatteri do swans at Viljandi. Animals are a good source of inspiration, but they are also a difficult subject. All in all, I think the workshop paid up in full and I do plan to consciously use and develop the stuff I learned there in upcoming practices.

Status Games continued where character work left off, namely the statuses of characters and the constant flux of it. We learned some basics of body language for high/low status and mingled with same/opposite status characters to put it into practice. Then came the difficult part: scenic statuses. A Status Card Deck was introduced with different statuses (scale 2…13) and emotions (hate, fear, love, joy) as suits. We’d draw a card, take the specified status and emotion (an inner drive for the character, not necessarily visible) and try to portray it. To final challenge was a two person scene where one person would have to treat the other like so that Other would be able to guess his/her own status/emotion. Statuses are not easy even though some would naively argue that the difference between a high and low status is discrete enough.

The workshops taught a lot and I even got to use some of what I learned in a couple of hours when the turn for Improgrupp Jaa! to perform came. 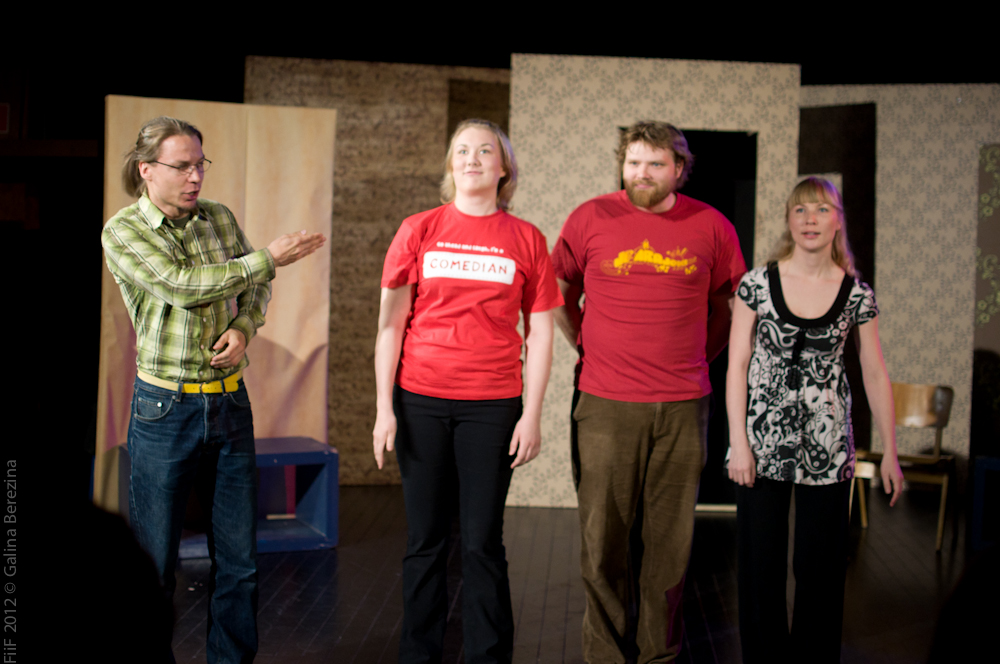 Iloinen Mursu presented something special, a show format where the actors were challenged to do scenes with specific elements in it. The challenges ranged from quite easy to the improbable, but were handled expertly to the joy of the audience. One of the challenges involved a rap song titled “Drive-by Cockroach Attack” that was undoubtedly the best improvised rap I’ve ever heard. We’d just spoken about doing something really scary (which, for me is rapping) on stage in a workshop and the tip was to do it with unwavering confidence. Really cool. I’m not going to give feedback to our own show because I’m too overcritical about myself. It’s sufficient to say that we went on stage and came back alive-ish. frei.wild did a series of audience-suggested scenes and used their own musician expertly. As I said, I’m a sucker for scenes that include an improvised song and frei.wild did not disappoint. Singer/songwriter playing an invisible guitar and singing about the horse she found to be her strictly friend was beautiful. Such moments should be taped, why were there no recorders? The ending was a bit disappointing in that it didn’t end happily. A woman was dying from chickenpox and the the virus decided to block the antidote and kill the woman. Then again, had the story ended with the woman’s survival it wouldn’t have been so memorable. Arrogantjes closed the individual team performances with a bang. The show was (a bit?) sexual, namely, they’d asked the audience to share their sexual fantasies anonymously and then continued to use those suggestions to create short sketches. Estonians don’t touch a lot, at least it’s not as common… so I was really positively surprised by the Netherlands troupe courage to do contact improv, and yes, contact improv in a sexual context. The characters were relatable and life-like, the stories believable. The All Star show meant that all the workshop instructors - professional improvisers with great skills -  had their turn to perform a long form. Watching that performance made me realize how young I still am - I’ve been doing improv for just a year while the performers had decades of experience. The story flowed flawlessly, the characters were diverse and believable. There was singing. And a big boxing match in slow motion… And a all-knowing zen-master. A display of improv skills by experienced teachers/actors.

We ended the night doing a show with all the teachers.  It was myself, Jeannie, Yani, Trent, Anya, Rod and Senja.  We had a very, very fun show.  It was such a treat to perform with Trent, Rod and the rest of the teaching staff.  The show was so fun. (From the blog of Jeff Griggs) International festival means cooperation, right? Names were drawn from a bag and named actors jumped to stage to perform a international long form. Amazing how simple it is for improvisers to work together. I’m no expert, but it seems to me that traditional theater requires a familiar setting and consistent troupe while the rules of improv - making your partner feel good - make it much easier to work even with strangers since your goals overlap. There were a few singing scenes and the audience actually sang along the chorus… at least I heard Senja do it from nearby. The night ended with a big round of applause for the comedians, instructors and staff and the more energized ones started the early morning of a new day in a sauna. The departure was uneventful and sad for me. A quiet breakfast and a ride to Helsinki, then with a boat back to Tallinn. The improvisers and the city of Tampere got really familiar, really fast. It actually felt a bit weird walking around, not speaking English, not hearing Finnish babble around me. The weather changed too, from windy and a bit cold to a hot summers day.

The festival gave me some perspective, both in terms of improvisation in foreign countries and a foreign country itself (this was my first abroad trip). I’m an improviser still in his early shoes and have a lot to learn. It will be interesting to see if I can deal with what I’ve seen and learned or try to be too ‘good’ too early.

The teams were given ten minutes of free stage time after their respective shows. That was cool, just going at it with people you barely know and finding it works out well.

The organization was good, really good. Thank, you, funny STAFF! As for the red shirts and passes… they said COMEDIAN. It’s official, I’ve earned my comedian stripes through a year-long challenge.

I think I’d like to spend a summer in Tampere / Helsinki, although the latter scares me a bit. It’d certainly be good for my pronunciation which still needs a lot of work.

The festival was everything I expected and more. The people were diverse, skilled and amazing. I do hope we/I get to do that again, next year.